7:00 pm ($5): A one-man show from Julie Ann Dulude about being raised by strict Catholic parents: Bless This Mess

8:00 pm to Midnight ($5): Four full hours of improv for only five bucks—tonight featuring UCBT house troupes Bastian, Sandino, Badman, Ragnaröck, and Monstro, followed by small groups of UCBT students each performing long scenes that seem to have nothing in common with each other but magically converge at the end, all at Harold Night

[TOP PICK] [$] [DISCOUNTED] 7:00 pm ($15 at the door on $18.50 online with discount codeFISHFAN): My #1 pick for the 2007 FringeNYC Festival, this wonderful group of actresses/improvisors portray characters as if they were in a play, but improvise everything they say and do. The luminous performers include Katharine Heller, Brenna Palughi, Lynne Rosenberg, Lauren Seikaly, and Molly Knefel, each of whom is immensely appealing and quick-witted. Further, they have an intimate, lovely chemistry with each other; and they’ve all committed to baring their personal lives, thinly disguised via their characters (hence the title’s Naked). As a result, this is one of the most honest & nuanced improvised shows you’ll ever see.

Although every episode is a wonderful theatrical event, readers of this site no longer have to pay theatrical prices; you can see this show for a mere $15 by mentioning code FISHFAN at the door. Check out some videos of previous episodes here; and then get in the habit of attending the Soho Playhouse to experience the always fresh and surprising Naked in a Fishbowl

8:00 pm ($5): Leah Bonnema (We TV, XM Sirius Radio) performs a one-woman show about “her mom, a coma, and the spirit of a boxer from Philly who has the eye of the tiger,” with an opener from sketch duo Skinny Bitch Jesus Meeting, in Wake Up and Yell At Me

[TOP PICK] [$] [DISCOUNTED] 9:00 pm ($15 online or at the box office using discount codeTJDNOV): Chicago-based TJ Jagodowski and Dave Pasquesi are a widely acclaimed improv duo. Just by feeling their way through moment by moment, they create one-hour tales that most authors couldn’t match with months of labored writing. Tonight is the conclusion of their four-evening run at The Barrow Street Theatre: TJ & Dave

[TOP PICK] 9:30 pm ($5): Mike Birbiglia (flat-out one of the finest stand-up comedians in the country; hour-long Comedy Central special What I Should Have Said is Nothing; two Comedy Central Presents half-hour specials; multiple appearances on Late Show with David Letterman andLate Night with Conan O’Brien; comedy CDs Two Drink Mike and My Secret Public Journal—Live; off-Broadway show Sleepwalk with Me) is honing his newest material—which means you can see a performance worth at least $40 for $5. Seats are sold out; but if you don’t mind standing, come and enjoy Mike Birbiglia: An Evening of New Stories

9:30 pm ($5): Sketch comedy duo Julia Morales and Oscar Montoya explore the quest for love in Date Me to Hell

[TOP PICK] 10:00 pm ($7): Genius improvisors Jason Mantzoukas (We Used to Go Out, Mother,Baby Mama) and Ed Herbstman (co-founder of the Magnet Theater) show off how breathtakingly quick-witted and skillful they are at creating scenes from air. Time Out New York named these guys Best Improv Duo of 2006. Jason is briefly back in NYC from his work in film in LA; take advantage of this rare opportunity to see these improvisation comedy stars shine in an intimate setting as The Mantzoukas Brothers

[FREE] 11:00 pm: If you’re an audience member who loves stand-up, Monday at 11 should beWhiplash! night (see listing above). If you’re a comic who couldn’t get booked on Leo’s show, though, you can opt to instead practice your skills on this new stand-up open-mic hosted by Michelle Wolf and Erin Lennox: Fresh 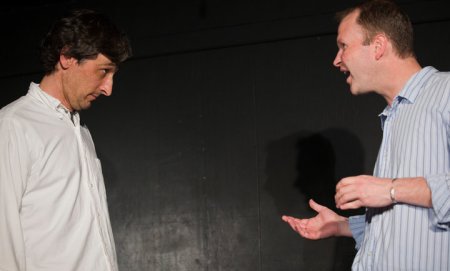 [TOP PICK] [$] [DISCOUNTED] 9:00 pm ($15 online or at the box office using discount codeTJDNOV): Chicago-based TJ Jagodowski and Dave Pasquesi are widely considered among the finest long-form improvisors alive. Just by feeling their way through moment by moment, they create one-hour tales that most authors couldn’t match with months of labored writing. Tonight is the next-to-last of their four-evening run at The Barrow Street Theatre, and should not be missed:TJ & Dave 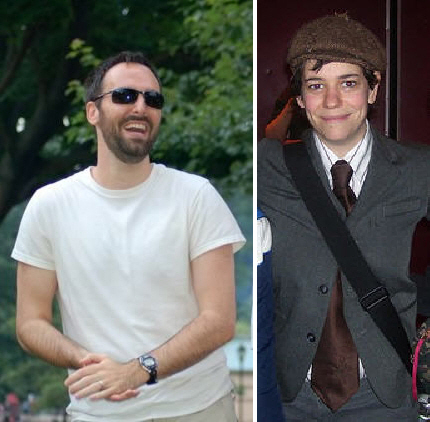 Every Saturday night starts off right with genius improvisors Anthony King, Becky Drysdale, and more performing at Let's Have a Ball

7:00 pm ($8): Ben Masten and Sam Dingman perform all-new sketches and songs via an act The Onion says, via back-handed compliment, “manages to sell even flimsy premises with smarts and winning chemistry:” Audience of Two: We Hardly Know What’s Up

[TOP PICK] 9:00 pm ($10): One of the gutsiest and most hilarious troupes in comedy history—and the Cage Match Champion for two years in a row!—genius improvisors Death by Roo Roo

J. K. Rowling is made acceptable for evangelical Christians tonight at A Harry Potter Musical

[TOP PICK] 7:30 pm ($10): A delightful tale of heartbreak by Leslie Meisel—who manages the impressive feat of being adorable, sexy, and hilarious all at the same time, and is a sharp comedic talent very much worth keeping an eye on—quite ably abetted by co-writer Megan Neuringer in one of the smartest theatrical shows to grace UCBT this year: Love Can Suck a Dick…and So Can I

…and for the other half of this double-bill, young talents do a sketch show about cops in The Sit Down and Shut Up NYPD Variety Hour

[TOP PICK] 9:00 pm ($7): Rachel Hamilton shares “tales from the frontlines of Internet dating” in the debut of her one-woman show Love.com

Cartoonists for The New Yorker do battle with their quick wits and drawing skills at Fisticuffs...

...while Patrick Cassels & Jeff Rubin explore the worst game-based films of all time in Bad Videogame Movies: The Definitive History

[$] 7:30 pm ($24.50 & 2-drink min.) A stand-up who’s starred in his own Comedy Central Presentsspecial, and performed on Jay Leno, Chelsea Lately, and numerous films (including Invincible) and TV series (including NBC’s Raines) headlining tonight through Sunday at the Carolines Comedy Club: Dov Davidoff

[TOP PICK] 8:00 pm ($5): “Seven family members, friends, coworkers and a neighbor of seven weeks accidentally ruin their final goodbyes,” performed by such hilarious comedy stars as Lennon Parham (from LA via Skype video) and Leslie Meisel (Love Sucks a Dick…), and the show’s writer/director Chris Kelly (and barring last-minute client emergencies, I may finally get to see this tonight): Oh My God, I Heard You’re Dying!; plus rounding out this double-bill, “pop culture obsessed Billy Eichner takes you on a fun-filled 30 minute journey through his twisted and topical celebrity-fueled world:” Billy Eichner Goes Pop!

[TOP PICK] 8:00 pm ($8): One of comedy’s most beloved and delightful duos, married couple Mary Archbold and Pay Shay, performing as guests on a hip-hop parody show: Squirm and Germ

8:00 pm ($8): The Magnet’s co-owner Armando Diaz performs monologues on the spot and improvisors then act out scenes based on them at The Armando Diaz Experience

[TOP PICK] 9:30 pm ($5): Patrick Cassels and Jeff Rubin, who write for College Humor and co-host the online video game talk show Bleep Bloop, explore the worst game-based movies of all time, with clips from Super Mario Bros, Mortal Kombat, and many more in what’s likely to be an unforgettably funny journey into the deliciously awful: Bad Videogame Movies: The Definitive History 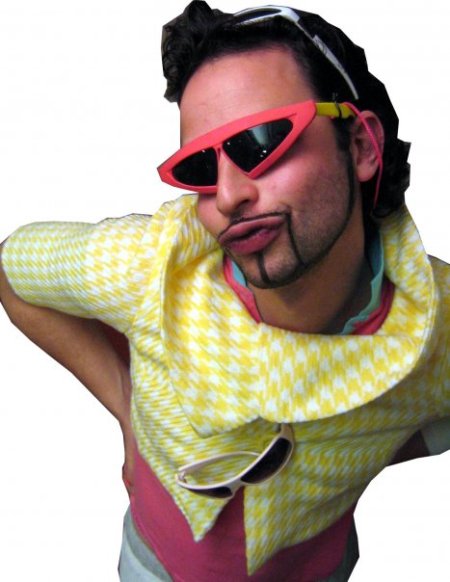 [TOP PICK] 9:30 pm ($5): One of the finest comedic storytelling shows in the country, in which brilliant writer/performers—who tonight are Anthony Atamanuik, John Flynn, Joe Mande, Ed Gavagan, and wonderful host David Martin—tell tales that are brutally honest and utterly hilarious, with tonight’s theme Money, at The Nights of Our Lives