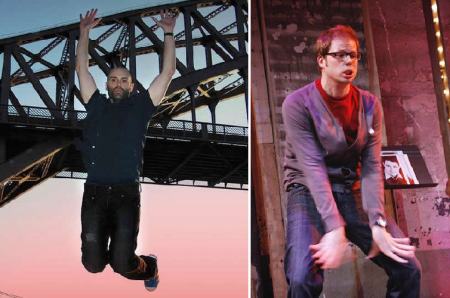 ...and Brenna Palughi (left) and Daliya Karnofsky (right) tonight may once again subtly express skepticism at the plans of the breathtaking Lauren Seikaly at the wonderful theatrical improv show Naked in a Fishbowl

[TOP PICK] [$] [DISCOUNTED] 7:00 pm ($15 at the door on $18.50 online with discount codeFISHFAN): My #1 pick for the 2007 FringeNYC Festival, this wonderful group of actresses/improvisors portray characters as if they were in a play, but improvise everything they say and do. The luminous performers include Katharine Heller, Brenna Palughi, Lynne Rosenberg, Lauren Seikaly, and Molly Knefel, each of whom is immensely appealing and quick-witted. Further, they have an intimate, lovely chemistry with each other; and they’ve all committed to baring their personal lives, thinly disguised via their characters (hence the title’s Naked). As a result, this is one of the most honest & nuanced improvised shows you’ll ever see.

In last week’s episode, Brenna Palughi provided an unforgettable description of her experience drinking a liter of salt water to achieve a “master cleanse.” With that warning, watch the video and be forever altered…

Although every episode is a wonderful theatrical event, readers of this site no longer have to pay theatrical prices; you can see this show for a mere $15 by mentioning code FISHFAN at the door. Check out some videos of previous episodes here; and then get in the habit of attending the Soho Playhouse to experience the always fresh and surprising Naked in a Fishbowl

8:00 pm ($5): “Best friends Dave Ahdoot and Ethan Fixell created an Internet phenomenon by challenging pairs of women to double date them and documenting the hilarious results for YouTubers everywhere. Two hundred dates later, their experiences were translated into reenactments, educational songs, and valuable lessons in everything from dancing to kissing. Tonight, these dating experts employ audience-recounted horror stories as inspiration for improvised scenes, in an attempt to enlighten you on the art of romance:” Dating Coaches

[TOP PICK] 9:30 pm ($5): Some of the finest improvisors in the country—Tara Copeland, Becky Drysdale, Jeff Hiller, Mike Still, Ashley Ward, and tonight’s guest Jon Gabrus (The Law Firm)—making up a musical on the spot along with virtuoso improv pianist Frank Spitznagel: Diamond Lion

[FREE] 11:00 pm: If you’re an audience member who loves stand-up, Monday at 11 should beWhiplash! night (see listing above). If you’re a comic who couldn’t get booked on UCBT’s all-star show, though, you can opt to instead practice your skills on this new stand-up open-mic hosted by Michelle Wolf and Erin Lennox: Fresh

This entry was posted on Monday, December 6th, 2010 at 9:12 am and is filed under Best New York Live Comedy Shows. You can follow any responses to this entry through the RSS 2.0 feed. You can leave a response, or trackback from your own site.