My favorite fast food place, Tuck Shop, got hit hard by Sandy. Please check out its amazing meat & veggie mini-pies; the 68 East 1st Street store is near UCB East and open very late…and is run by a fiery Aussie redhead who’s a delight. 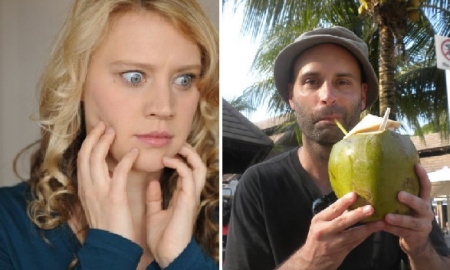 SNL’s Kate McKinnon performs a character bit at Characters Welcome; Ted Alexandro does stand-ups at The Stand (8:30) and Comedy Cellar (11:00)

[TOP PICK] [$] 2:00 pm & 8:00 pm ($65): This isn’t pure comedy, but an enchanting hodgepodge of original tall tales fueled by laughs. The 2-hour play from the wonderful guys of PigPen blends shadow puppetry, songs, inventive staging, and more to create living dreams. For my review of PigPen’s two previous shows at FringeNYC, please click here and here. This newest work is their most ambitious, and that sometimes results in the story feeling too slow or padded; but it also yields a deeper emotional payoff. And even though not all the bits hit the mark, so many of them do that you’re likely to feel satisfied—and missing PigPen’s world after the show is over. The production is at The Gym at Judson (243 Thompson Street) in the West Village: The Old Man and the Moon

[TOP PICK] 7:30 pm ($7): A sharp musical improv troupe makes up stories with song and dance based on an audience suggestion: Choral Rage

[TOP PICK] 10:00 pm ($11.34 online; or $10 at the door—but this show typically sells out in advance): Erik Bergstrom (cartoonist/author of Grimmer Tales, The New Yorker, Comedy Central’s Indecision 2012), Amber Nelson (fearless, innovative rising star; sketch troupe The Prom, co-host of Late Night Stand and Mustache Party), Tom McCaffrey, Pete Lee, Christie Walsh, Nick Turner, Nate Fridson, Nathan Anderson, Abigoliah Schuman, Ron Krasnow, and Joel Walkowski performing stand-up for this show in which comedy and burlesque are weirdly blended together based on the reasoning “The nude female form is truly a work of art. That’s why people the world over like to jerk off to it. Who are we to disagree with the world?”at The Creek upstairs theatre in Queens’ Long Island City hosted by Pat Dixon (Comedy Central Presents): Pat Dixon’s (Nearly) Naked Lady Hour: Now with Bacon Bar

10:30 pm ($7): Magnet Instructors Louis Kornfeld and Rick Andrews pair together for one night of improvisation as comedy duo Kornfeld & Andrews