Honestly, I can’t get past the fact Andy Daly’s character in Review has no credible motivation for the idiotic things he does. (“Comedy” doesn’t mean “Throw storytelling rules out the window…”) Still, any series featuring the luminous & brilliant Jessica St. Clair automatically has its existence justified; plus the writing staff includes wonderful comics Leo Allen and Andy Blitz. That said: 10:00 pm on Comedy Central.
Also, tune into @midnight for comedy giants Patton Oswalt & Brian Posehn. 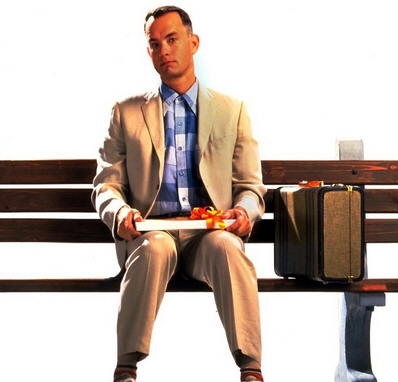 …and then catch a tribute to this Sunday’s return of an all-time great TV series: Game of Thrones Season Premier is Extravaganza… 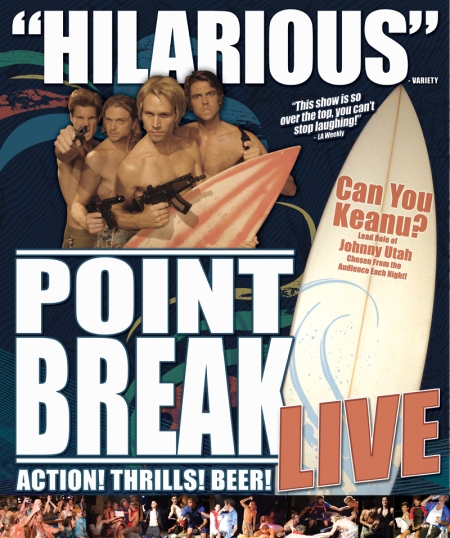 …or see a parody of a different type of “classic” at the stage recreation of a Keanu Reeves / Gary Busey flick: Point Break Live

[TOP PICK] 7:00 pm ($10): A unique musical improv show in which scenes explode into popular songs with with tunes you know but entirely made up lyrics. Instead of an improv pianist, this show uses a DJ spinning karaoke tracks at The PIT upstairs theatre: Happy Karaoke Fun Time!

[TOP PICK] 8:00 pm ($5): At UCB Chelsea, Matt Dennie & Josh Sharp prove themselves among the finest writer/performers at UCB with a consistently charming and hilarious version of Forest Gump that covers the entire film in 30 minutes, and features a deliciously funny Jenny played by Brandon Gulya, who also directed, resulting in one of the best sketch shows currently playing on an NYC stage: GUMP…

…and in the second half of this double-bill, a full-blown musical about “three polygamist pop stars on the hunt for their brother husband,” starring Caitlin Davis, Kaleigh Malloy, and Elizabeth May (with some help from Dave May): Missionary in Manhattan: A Mormon Musical

[TOP PICK] 8:00 pm-10:00 pm ($7 for the entire evening): The Magnet house improv groups Junior Varsity and Hello Laser performing improv for an hour, followed at 9:00 pm by Welded (musical improv that takes two seemingly separate scenes and fuses them together), at 10:00 pm by veteran improvisors making up scenes based on improvised monologues from storyteller Jed Teres at The Armando Diaz Experience, and finally at 11:00 by improv competition Inspirado (like UCBT’s Cage Match, but with a game-like challenge component): The Magnet’s Night Out

[TOP PICK] 9:30 pm ($5): A tribute to one of the all-time greatest shows in TV history (and which is thankfully returning to HBO this Sunday night), featuring such stellar sketch comics as Aaron Jackson and Brandon Gulya performing at UCB Chelsea hosted by Alan Starzinski and Kate Riley (as Jon Snow and Daenerys Targaryen): Game of Thrones Season Premier is Extravaganza

9:30 pm ($10): Improv troupe The Jessicas (which includes dynamic actress Jessica Sherr) makes stuff up with guest improvisor Julia Morales, plus opening improv groups Puh-Sow! and Stefan and Friends, all at The PIT upstairs theatre: The Jessicas Have a Crush on Langston Belton

[TOP PICK] 11:00 pm ($5): Last week improv group Fuck That Shit easily won its 9th victory in a row against team Gulf Oil with a score of 71-45. Tonight FTS aims goes up against a prestigious UCB East weekend improv group, What I Did For Love, competing for your laughs and votes at UCB Chelsea for the raucous Cage Match