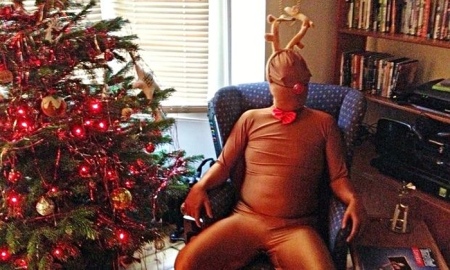 Comedy genius Daniel Kitson brings dark cheer to NYC through 12/18 in A Show for Christmas (8:00 pm, $25, The Connelly Theater at 220 East 4th Street between Avenues A & B). The entire run is sold out, but if you arrive 30 minutes before showtime to get on the waiting list the theatre might be able to squeeze you in…

…and “The Star Wars Holiday Special was broadcast in its entirety only once, in the United States and Canada, on November 17, 1978, preempting Wonder Woman and The Incredible Hulk. It has never been rebroadcast or officially released on home video. David Hofstede called it ‘the worst two hours of television ever.’ George Lucas has reportedly said ‘If I had the time and a sledgehammer, I would track down every copy of that show and smash it.’ Join us and find out why Cherry Pitz is obsessed with it!” in this burlesque tribute accompanied by clips of the show hosted by Cherry Pitz (a.k.a. sharp storyteller Cyndi Freeman): Hotsy Totsy Burlesque Tribute to Star Wars (8:00 pm, $10, The Slipper Room at 167 Orchard Street)

[TOP PICK] [$] [DISCOUNTED] 7:00 pm ($24.75 via Goldstar [vs. $29 at the door]): The only FringeNYC show to ever include a barbershop quartet singing about alcohol and three rounds for each audience member (for my full review, which includes a rave for the spectacular Nicole DiMattei, please click here) is now playing as a perfect show for a date every Friday & Saturday night at the West Village’s Soho Playhouse (15 Vandam Street, in the downstairs Huron Club): The Imbible: A Spirited History of Drinking

[TOP PICK] 8:00 pm ($5): Improvisors remake a blockbuster film or classic story (suggested by the audience) in the style of indie filmmaker Wes Anderson at The PIT downstairs lounge: Forty Minutes in the Style of Wes Anderson: Popular Tales Retold

8:00 pm-Midnight ($10 for the entire evening): Two veteran house improv groups, a themed improv show, and an improv competition, all for just $10 at The Magnet theatre: The Magnet’s Thursday Night Out

9:30 pm ($10): A Harry Potter parody by the writer of the seriously flawed Kapow-i GoGo (but maybe this will be better) at The PIT upstairs theatre: Puffs, or Seven Increasingly Eventful Years at a Certain School of Magic & Magic

10:00 pm ($10): Sketch comedy that describes itself as “a dramatized guide for navigating through everyday concerns such as the meaning of life, our goals & flaws, our sexual curiosities, and the inevitability of a slow death in our soul crushing cesspool” at The PIT downstairs lounge: Cliffnotes on the Human Condition

[FREE] 7:30 pm: Weekly open mic that provides 5 minutes for each audience member whose name is pulled out of a bucket to perform a true story, sketch, or characters at Brooklyn’s Over the Eight (594 Union Ave) hosted by JiJi Lee & Patrick Clair: Split Personality Open Mic Storytelling & Sketch

[ALMOST FREE] 11:00 pm ($1): A supportively silly jam for duo improv (you’ll be paired up on the spot) in which the audience shows “Good Scene!” at the end of every scene at The PIT upstairs theatre hosted by improv group Judith: Good Scene!: A Judith Jam

This entry was posted on Thursday, December 10th, 2015 at 11:45 am and is filed under Best New York Live Comedy Shows. You can follow any responses to this entry through the RSS 2.0 feed. You can leave a response, or trackback from your own site.