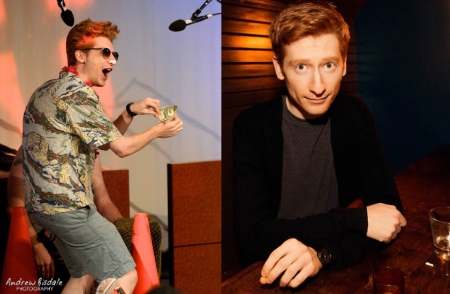 …and it’s the second and final day of the spectacular Natalie Wall hosting storytellers sharing their most embarrassing and hilarious sexual experiences via three shows running from 7:30 to midnight: Awkward Sex Festival (7:30, 9:00 pm, and 10:30 pm, $6-$8, Astoria Queens’ QED: A Place to Show & Tell at 27-16 23rd Avenue)

[TOP PICK] 7:00 pm ($7): Eleven comics parody Broadway productions at The Magnet theatre: This Is Not A Broadway Show: The Musical

[TOP PICK] 7:00 pm ($5): Six improvisors compete for your laughs and votes at this fun improv game show at The PIT upstairs theatre hosted by the wonderful Tracy Mull: The Island: An Improv Competition

…and in the second half of this double-bill, a sketch show based on the experiences of comedy couple John Murray & Silvija Ozols as Silvija tried to get pregnant: Infertile

[TOP PICK] 8:00 pm ($5): A game show pitting the audience against a panel of three comics. Each comedian picks one subject, and then the audience writes questions about the subject. If the comics fail to correctly answer any question, whoever wrote the question wins a free shot of sponsored liquor, plus the whole audience gets some points. If the audience winds up with more points than the panel, it will punish one of the comics by choosing him or her to perform improvised stand-up comedy. It all happens at The Creek upstairs theatre in Queens’ LIC (10-93 Jackson Avenue): Specific Ignorance

8:00 pm ($10): Short political plays from across the country are performed at The PIT upstairs theatre: Raucous Caucus

9:30 pm ($10): A comedic play with bite about the Hollywood experience for minorities, in which “four black actors in Room 4 have just realized they’re stuck in a time loop, auditioning for the same role of ‘Drug Dealer #2’ over and over. What once felt like a messed-up metaphor has become a literal existential nightmare. Get them out of there” at The PIT upstairs theatre written by Marina & Nicco, and with an eight-man cast…one of whom plays a literal Magical Negro: Room 4

10:00 pm ($5): 60 comics each made 1-minute videos. After every video is screened, you’re encouraged to take a shot of beer. This party-like show includes additional drinking games, prizes, “and so much drunken bonding” at The Creek upstairs theatre in Queens’ LIC (10-93 Jackson Avenue) hosted by Chris Donahue: 60 Shots for 60 Shorts

[TOP PICK] 10:30 pm ($5): “George and Martha are back and they’re drunker than ever! Richard Burton (Jason Specland) and Elizabeth Taylor (Adrian Sexton) reprise the roles of George and Martha from Edward Albee’s famous play, but without Edward Albee’s famous words. Joining them on this fateful evening: A young, innocent, real-life couple whose actual relationship issues will be cunningly used against them in a series of cruel games. What secrets will be uncovered? What have George and Martha been lying about? And, most importantly, just how much can two people drink in a forty minute show?” at The PIT downstairs lounge: Don’t Talk About the [BLANK], Martha! An Improvised Who’s Afraid of Virginia Woolf?

10:30 pm ($5): A rotating pool of improvisors perform in groups of five at Brooklyn’s The Annoyance Theatre (367 Bedford Avenue; take J/M/Z to Marcy Avenue or L to Lorimer Street): Singles Motel