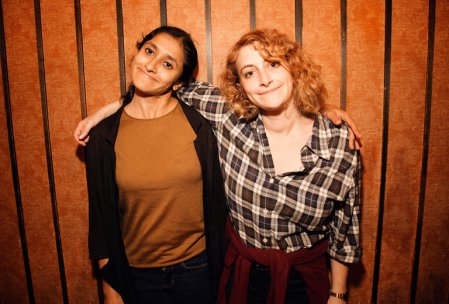 6:30 pm ($10): A one-woman show by Tahlia Robinson playing “a time traveler, a self-indulgent protagonist, a deal closer, and a charming forgetful matriarch” at The PIT Underground: The Real Bubble Lives of Building 104

7:00 pm ($10): Springboarding off the Food Network’s Cutthroat Kitchen, this show pits three improv groups against each other by making them meet multiple challenges while encouraging them to try to sabotage each other at The PIT Loft (154 West 29th Street) hosted by Harry Marker: Cutthroat Improv

[TOP PICK] 7:30 pm ($10): “Created in 1995 at the iO Theater in Chicago, The Armando Diaz Experience is the longest running improv show ever. A guest monologist—who tonight is Chris Duffy—takes a suggestion from the audience and shares true personal tales. These stories are then brought to life by a rotating cast of improv all-stars—and occasionally Armando himself” at The Magnet theatre: The Armando Diaz Experience

7:30 pm ($10): Improvisors Katie Hammond & Daniel Tepper create a musical on the spot based on a location invented by an audience member at The PIT Underground: What Town? (The Musical)

9:30 pm ($10): Improvisors make up scenes of a relationship springboarding off an audience-supplied wedding announcement in The New York Times at The PIT Loft (154 West 29th Street): Forever: Improv Inspired by NYT Wedding Announcements

[TOP PICK] 11:30 ($7): A game show that describes itself as follows: “Ever talk to a straight guy and think, ‘Jesus Christ you’re boring!’ Join gay-ass hosts Dave Mizzoni & Matt Rogers as they gay up the straights through games and trivia. Life lines include one woke woman and a wise queer. Come witness the ultimate test of who Is honorarily Gay As Fuck!” at the UCB East theatre: GAYme Show

11:30 pm ($5): Comics pretend to be infants at The PIT Underground: Babies Night

[FREE] Midnight: “A psychedelic journey through space-time. The stand-ups on this show have seen the other side. They have surfed the waves of consciousness and mastered their superego to a near shamanic level. They are here to guide you on a quest of understanding and wonder. Also, they’re going to be tripping balls” at Queens LIC’s The Creek upstairs theatre hosted by “the spirit animal of Evan Jones:” The Only One Tripping