However, I’ll still provide last-minute info on shows that especially merit attention, so please feel encouraged to check in regularly for updates. The best way to be instantly notified about new show postings is to subscribe my BestNewYorkComedy.com blog and allow for email notifications, and/or to follow me on Twitter (@hybender) or Instagram (@hybenderny).

All that said, here are a few extra special recommendations for the remainder of October (updated on Friday 10/20):

A national comedy treasure who co-stars on HBO’s Curb Your Enthusiasm and ABC’s The Goldbergs, and who has a uniquely laid-back, anecdote-based stand-up style that’s a delight, headlines at the Carolines Comedy Club: Jeff Garlin (Friday 10/20 and Saturday 10/21 at 7:30 pm & 10:00 pm; $46.50 plus 2-drink min.; Carolines Comedy Club at 1626 Broadway)

Superb storyteller David Lawson (The Flyer Guy, No Oddjob) performs a hilarious and fascinating one-man show “about those three Star Wars movies most people hate. About how art can mean something different at different ages, discovering the limits of one’s own nerddom, the thrill of watching a movie stoned, the final massive cultural event before social media took over, telling the elder at synagogue you think the anti-Semitic character is comedy gold, and the warmth of loving a certain movie trilogy that is so universally loathed,” with opening stories by Lynn Bixenspan (sharp host of Relationsh!t), Nick Padilla (co-host of ASS), and Andrew Sanford: David Lawson’s The Prequels (Friday 10/20 at 7:00 pm, $10, The Tank at 312 West 36th Street between Eighth & Ninth Avenues) 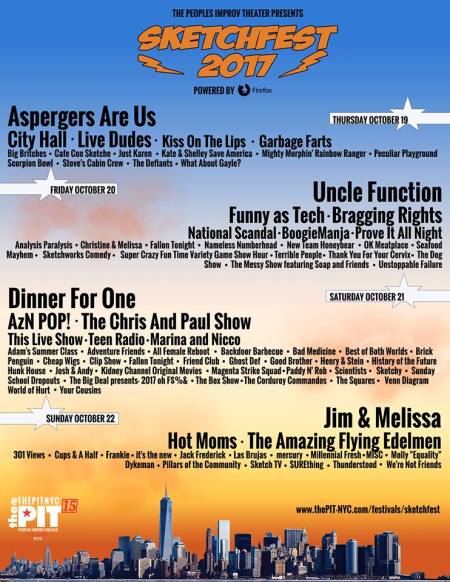 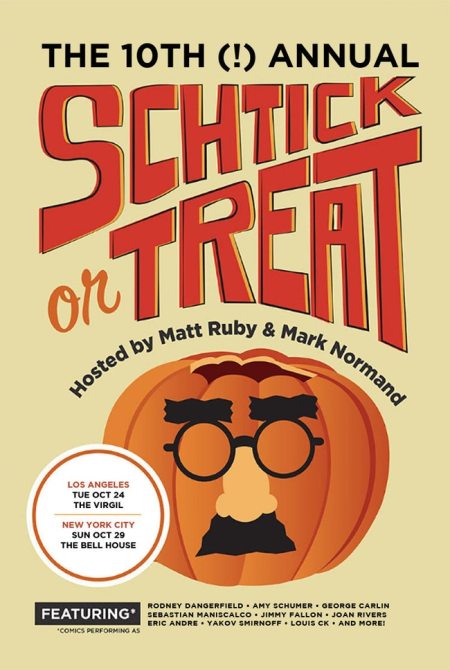 For the 10th year of this fabulous annual event, over 40 NYC comics get a couple of minutes each to do a set as a famous comedian (e.g., Louis C.K., Amy Schumer, George Carlin, Jimmy Fallon, Rodney Dangerfield…the possibilities are endless) hosted by Mark Normand & Matt Ruby: The 10th Annual Schtick or Treat (Sunday 10/29 at 8:00 pm, $15, The Bell House at 149 7th Street; take R subway to 9th Street or F/G to Fourth Avenue) 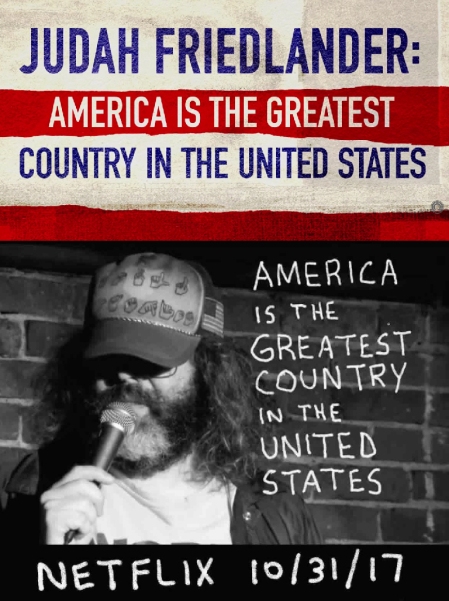 Judah Friedlander (one of the quickest minds and very finest stand-ups in comedy; 30 Rock, Meet the Parents, Along Came Polly, author of bestselling cartoon book If the Raindrops United) releases a black & white stand-up special via Netflix on Halloween that he wrote, performed, directed, produced, and edited from numerous sets he performed this year at the West VIllage’s Comedy Cellar. TItled America is the Greatest Country in the United States, much of the material is a response to our current insane Trump era. According to Judah, the 84-minute special “mostly satirizes American Exceptionalism, including U.S. domestic & foreign policy; it’s a comedy about racism, sexism, imperialism, climate change, health care, LGBTQ rights, fascism, drones, and mass incarceration.” For the trailer, please click here.

This entry was posted on Friday, October 20th, 2017 at 9:37 am and is filed under Best New York Live Comedy Shows. You can follow any responses to this entry through the RSS 2.0 feed. You can leave a response, or trackback from your own site.