That said, my top NYC comedy recommendations for September 2018 (with much more to come soon) include: 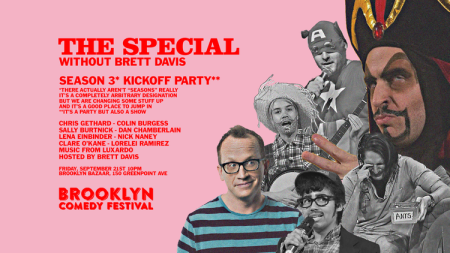 Friday 9/21-Sunday 9/23: An annual week-long (it started Monday) festival celebrating the best of Brooklyn-based live comedy shows, NYC comics, and other comedy events, with tonight’s shows including Chris Gethard, Clare O’Kane, Colin Burgess, Dan Chamberlain, Nick Naney, and more performing for The Special Without Brett Davis (hosted by Brett playing different characters) 10:00 pm at Brooklyn Bazaar. You can buy all-you-can-see-passes for just $11.42 for each of these last three days of the fest. For a complete list of events, please click Brooklyn Comedy Festival 2018 (all-access pass for Friday, Saturday, and/or Sunday for just $11.42 each—a great deal—online using discount code CLOUDY10; nine Brooklyn venues, but most shows for what’s left of the fest are at Brooklyn Bazaar)

Friday 9/21: Cool as Ice is a 1991 rap remake of The Wild One—with the freewheeling, motorcycle-riding Marlon Brando role played by Vanilla Ice in his feature film debut. It earned him that year’s Razzie Award for “Worst New Star;” the movie cost $6 million to make and grossed $1.2 million; and it’s rated only 2.9 stars (out of 10) on IMDB, so is in every notable way a colossal failure. Tonight it’ll be screened and mercilessly skewered by comics Frank Conniff (TV’s Frank on Mystery Science Theater 3000; Cinematic Titanic; author of How to Write Cheesy Movies and 25 MST3K Films That Changed My Life In No Way Whatsoever), Derek Humphrey (ABC, MTV, host of podcast Derek Mansplains It All), Erin Lynn O’Connor (Open Riff Night winner), and Freddy G (NPR). Their cruelty will be contrasted by exceptionally kind host Chris Gersbeck (co-host of Soft Core!, which is essentially a porn version of this show, Casual Sets, and Bunk Bed Time Open Mic): Movies R Dumb: Cool As Ice (11:00 pm, $10, Astoria Queens’ QED: A Place to Show & Tell at 27-16 23rd Avenue)