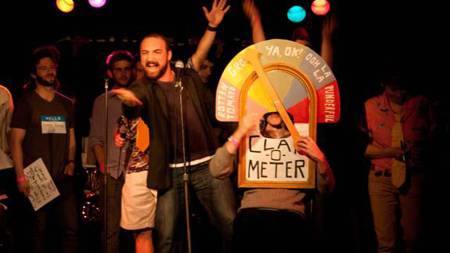 Tuesday 11/6: A raucous monthly pun competition hosted by Fred Firestone (co-author with Jo Firestone of #1 bestselling Punderdome: A Card Game for Pun Lovers), with 18 audience members fiercely competing for wordplay dominance—and the chance to become an instant star based on verbal cleverness, and the ability to drum up the most applause from a packed and loudly cheering crowd: Punderdome 3000 (8:00 pm, $10, Brooklyn’s Littlefield at 635 Sackett Street—take R subway to Union Street; show up early—doors open at 7:00—to nab a seat, or plan on standing)

Wednesday 11/7: The luminous and multi-talented Lane Moore (HBO’s Girls; Sex & Relationship Editor of Cosmo; writer for The Onion, McSweeney’s; host of smash hit show Tinder Live) has just released her first book, an instant bestseller titled How to be Alone. Come see Lane interviewed about it by Scott Rogowsky (NBC’s The Voice; host of wildly popular trivia game app HQ Trivia) at one of NYC’s most iconic bookstores, The Strand: Lane Moore’s How to Be Alone Book Release Interview (7:00 pm, $15to receive admission plus a $15 Stand gift card, or $16 for admission plus a signed copy of Lane’s book; The Strand’s Rare Book Room, 828 Broadway at corner of 12th Street, 3rd Floor)