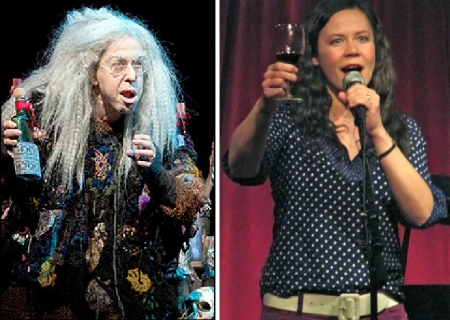 [TOP PICK] [$] [DISCOUNTED] 9:00 pm (FREE TICKETS if you reserve in advance by calling (212) 260-2445 and mention HyReviews.com, but there’s still a 2-drink min. per person): Judah Friedlander (one of the quickest minds in comedy; 30 Rock, Meet the Parents, Along Came Polly, author of How to Beat Up Anybody), Harris Stanton (Comedy Central), and more performing at the only comedy club in the East Village: Eastville Comedy Club

Jackie Hoffman and Julie Sharbutt are among the luminous theatre stars at tonight's "Gravid Water"...

...Erin Lennox hosts her very special monthly stand-up show "I Like You Too;" Leslie Goshko (above) and Ophira Eisenberg are among the wonderful storytellers at Adam Wade's "Whatever Happened to the Nerds?"... 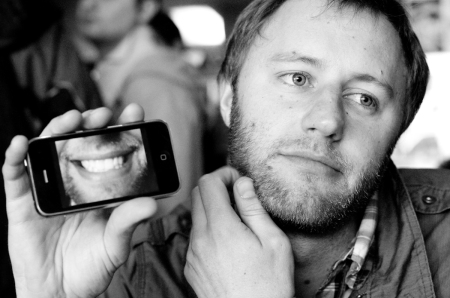 ..and Rory Scovel debuts a promising oddball show at The Creek with Scott Moran: "Memories From a Happy House"

[TOP PICK] [$] 6:30 pm ($10): The 8th Annual NY Arab-American Comedy Festival kicks off its second night at The PIT with personal storytelling about being Arab-American in 2011—which is likely to be fascinating, despite the title some dunderhead gave the show: Tales From the Funnyside

7:00 pm & 9:00 pm (no cover, 1-item min.): The perfect show for short attention spans—open-mic stand-up with 4 minutes per set and 25 comics crammed into 2 hours—with an early show hosted by Sean Donnelly & Blaine Perry at 7:00 pm, and an entirely different group of stand-ups hosted by Dan Cartwright & Dave Greek at 9:00 pm—at the Luca Lounge (222 Avenue B off 14th Street) for John Morrison’s Motel Luca

[TOP PICK] 8:00 pm ($6.50 online or $8 at the door): Puppetry to Melt Your Face Off, Alie & Georgia (LA mixologists behind The McNuggetini), Jeff Kreisler, and musical guest Genghis Barbie performing at Brooklyn’s Littlefield (622 Degraw Street) with sketches and more from a duo who between them won four 2011 ECNY Awards—including Best Variety Show and Best Hosts—Kristen Schaal and Kurt Braunohler: Hot Tub Variety with Kurt & Kristen

[$] 8:00 pm ($20): The 8th Annual NY Arab-American Comedy Festival continues its second night with sketch, both live and via film clips, from Arab-American actors who’ve appeared on HBO, NBC, MTV, and CNN, and in such films as The Visitor, House of Saddam, You Don’t Mess with Zohan, The Interpreter, and Sex in the City 2, “bringing the comedy revolution from the Middle East to The PIT; it’s actually more funny than sketchy:” Sketchy Arabs

8:30 pm ($5): A one-man show about “being part of a different world that has its own language and alphabet and style of beard…There are things I really need to show you, just so you know what’s going on, or where I’m coming from, or where Armenia actually is” at The Magnet: Openly Armenian

[TOP PICK] [FREE] 10:00 pm: Rory Scovel (Conan O’Brien, Jimmy Fallon, Comedy Central) and Scott Moran debut an hour-long show they describe as “PeeWee’s Playhouse hosts stand-up on acid directed by David Lynch; step into a time machine that doesn’t exist and be transported to a warehouse in the middle of your mind where escaped mental patients are putting on their hit TV special—except the patients are so mental, they aren’t even mental patients at all” at The Creek upstairs theatre in Queens’ Long Island City: Memories From a Happy House