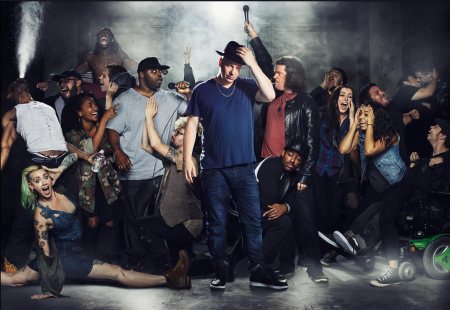 7:30 pm & 9:00 pm ($10): An Election episode of a serialized radio play about the town of Cold Lake, Minnesota celebrating its bicentennial: “From the ice fishing fleets, to local artist Linda Klaver’s open mic night at Debbie’s Bar/Bait Shop, fortunes will rise and fall like the snow—which, actually, only falls. Unless there’s a gust of wind, then it rises. Kinda:” written & directed by Colin Waitt, and produced by Kristin McCarthy Parker & Stephen Stout, at The PIT Loft (154 West 29th Street): From Cold Lake: Election

[TOP PICK] 8:00 pm ($5): At the UCB Chelsea theatre, a sketch show based on the premise “Elections take too long. Elon Musk, the futurist billionaire owner of SpaceX, is sponsoring a radical new election that is a thousand times faster than before. Experience an entire election cycle from candidates throwing their hat in the ring to the final vote in just 30 minutes:” ElectionX: The High-Speed Future of Democracy…

9:30 pm ($5): Improv duo Out the Embryo (Ray Morency & Zac Brown) and a guest improv team make up scenes at The PIT upstairs theatre: Out the Embryo Presents