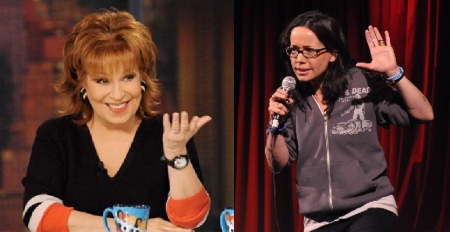 [TOP PICK] 8:00 pm ($5): Movie & TV star Janeane Garofalo, TV star Joy Behar (ABC’s The View), TV critic Emily Nussbaum (The New Yorker), and Stacy London (What Not to Wear) describing what it’s like to have a dreamy job at UCB Chelsea to host Catie Lazarus with musical accompaniment by Chris Sullivan (a.k.a., Shockwave; amazing human boombox; The Daily Show, The Electric Company, Freestyle Love Supreme, co-host of The BEATdown) and silliness by Rob Lathan (Conan O’Brien, Inside Amy Schumer): Employee of the Month

[TOP PICK] 8:00 pm-MIdnight ($7 for the entire evening): The Magnet house improv groups The Boss and Junior Varsity performing improv for an hour, followed at 9:00 pm by Medusa (all improvisers stay on stage at all times, and alternate between speaking roles and playing inanimate objects), and at 10:00 pm by veteran improvisors making up scenes based on improvised monologues from storyteller Nick Stevens at The Armando Diaz Experience, and finally at 11:00 improv competition Inspirado (like UCBT’s Cage Match, but with a game-like challenge component): The Magnet’s Night Out

[TOP PICK] 8:00 pm ($8): Storytellers Karolena Theresa, Alexandra Kern, JiJi Lee, and Mike Brown tells tales about this month’s theme of Dating, and then hosts Anna Roisman & Katie Haller sing songs they’ve written pre-show about those stories, at The PIT upstairs theatre: You Probably Think This Song Is About You

[TOP PICK] [$] 8:30 pm ($20): A former roommate & drinking buddy of such comedy giants as David Cross and Marc Maron performs a one-man show that was such a hit at August’s FringeNYC it’s been extended indefinitely. Please read my review by clicking here, and Jason Zinoman’s New York Times review by clicking here; and then come share an intimate hour with Matt Graham at the Soho Playhouse’s downstairs Huron Club so he can explain life and meaning and why This Too Shall Suck

…and in the other half of this double-bill, sketch troupe Boat performs 30 minutes of bits at Boat: Comedic Sketches

[TOP PICK] 11:00 pm ($5): Good lord. Last week improv legends Death by Roo Roo were defeated by group Apollo by a single vote, 80-79. Tonight the new champions have the task of proving this wasn’t a fluke by facing Big Margaret at UCB Chelsea competing for your laughs and votes at the raucous Cage Match