I’m one of the finest ghostwriters in the country; my 20+ books include two New York Times bestsellers, a phenom megaseller that hit #16 on Amazon.com and has sold over 300,000 copies to date, and an interview book with legendary author Neil Gaiman that hit #240 on Amazon.com. I’ve also written five Dummies books and a Complete Idiot’s Guide. I cover comedy as a labor of love. But if you need help with a book, let’s chat, because there’s no one better at ghostwriting, editing, and/or coaching. Alternatively, if you know someone who should have a book, please refer him or her to me; for a year, you’ll get 10% of all revenue I receive from the referral (e.g., if the client pays me $50,000, you’ll get $5,000). To learn more about my services, please visit BookProposal.net and then email me at hy@hyreviews.com.

That said, my top NYC comedy recommendations for May 2019 (with much more to come soon) include: 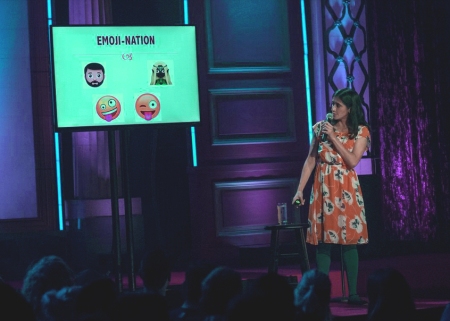 Friday 5/24: Ace comics Aparna Nancherla (above; one of the very finest stand-ups in the country; co-star of Super Bowl 2019 commercial, Comedy Central’s Corporate, and HBO’s Crashing; also performed on HBO’s 2 Dope Queens, Netflix’s Master of None and The Standups, TBS’ Conan O’Brien, and Comedy Central’s @Midnight and Half Hour; former writer for Seth Meyers; comedy album Just Putting It Out There), Shalewa Sharpe (Comedy Central’s The New Negroes; Keith and the Girl; comedy album Stay Eating Cookies), and Jon Bershad (writer for MTV, TruTV, The Onion; UCBT’s Harold Night and Maude Night) each try to improvise a coherent presentation based on a set of Powerpoint slides they’ve never seen before. All slides are taken from actual presentations given at business meetings and classrooms, but put together in bizarre arrangements: “How do you move from a slide depicting the annual increase in fertilizer production in Turkmenistan to a slide analyzing gender dynamics in Frasier? We don’t know either, but we intend to find out. Plus an actual scientist will have his or her actual, legit presentation ‘improved’ by one of our guest improvisers.” Hosted by Nat Towsen (Esquire, VICE, College Humor, host of Downtown Variety) and Darren Solomon (In Bb 2.0; Creative Director of Quiet City Music+Sound), with musical guest Loren Berí: Powerpoint Roulette (7:00 pm, $12, LES’ Caveat at 21-A Clinton Street; take F/J/M/Z subway to Delancey Street/Essex Street) 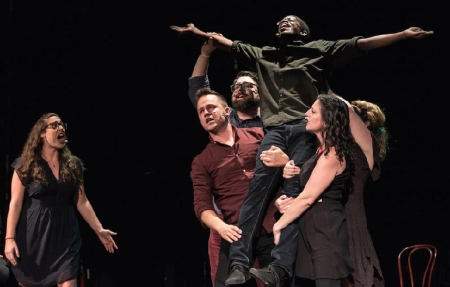 Friday 5/24: Highly talented hip-hop improv group North Coast attempts to create a Hamilton on the spot by making up a musical based on an audience suggestion of a famous historical figure: Anybody: An Improvised Historical Hip-Hopera (9:30 pm, $17 online or $20 at the door, LES’ Caveat at 21-A Clinton Street; take F/J/M/Z subway to Delancey Street/Essex Street)