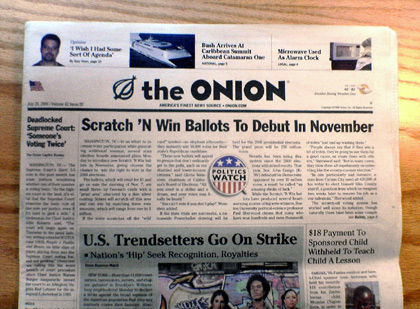 Joe Garden and Todd Hanson, the editors of The Onion, perform at Tell Your Friends...

...and Myq Kaplan performs at Sweet

8:00 pm ($5): A one-man show by Pat Bellatina “being selected as the keynote speaker at his former high school’s commencement. Will he be brave enough to admit that he knows nothing? This comedic musical memoir explores the illusion of success, the joys of lying, and growing up in the Bronx while pretending you didn’t” at The PIT upstairs theatre following a sold-out run at Ars Nova: No No No Yes

8:00 pm-Midnight ($5): Four full hours of improv at UCB Chelsea for only five bucks—tonight featuring UCBT house troupes Still Mike, Creature, Very Good Kiss, Grandma’s Ashes, and Deckard—and at 11:00 pm a range of UCBT students getting on stage with improv veterans at The Lottery—all at Harold Night

8:30 pm ($5): In this double-bill, each of two of The Magnet’s singing improv troupes will make up a musical on the spot based on an audience suggestion: Rosencrantz and Mint Condition

9:30 pm ($5): D&D-style epic fantasy improv, plus nerdy stand-up and music from David Cope and Jonathan Mann, at The PIT upstairs theatre hosted by Eric Grundhauserled as your Dungeon Master

[TOP PICK] [FREE] and a free, laid-back, and occasionally magical variety show where virtually anything can happen on a School Night (11:00).

[TOP PICK] [FREE] a show showcasing rejected material by top writers and comedic performers who were then rejected again by Jon Friedman when submitting to his recently-published book Rejected: Tales of the Failed, Dumped, and Canceled—plus performances and readings from contributors who were actually accepted into the book—at a special free edition of The Rejection Show (7:30 pm),

[TOP PICK] [$] some of the most lightning-quick & hilarious stand-up comics in the country—including Anthony Jeselnik (staff writer for Jimmy Fallon; HBO, Comedy Central), Pete Holmes (Comedy Central, VH1, The New Yorker), Big Jay Oakerson (HBO, Comedy Central, Showtime, MTV), and many more—relating tales of when they used to support their art by working as waiters: Service Not Included! (8:00 pm),

[TOP PICK] an entirely improvised musical from genius improv duo Eliza Skinner and Glennis McMurray, and an improvised soap opera, in the double-bill I Eat Pandas and Hot Lather: As the Diamond Burns (9:30 pm),