Mark Douglas, Todd Womack, and Anastasia Douglas, the creators of Web phenom Key of Awesome, are at 92Y Tribeca... 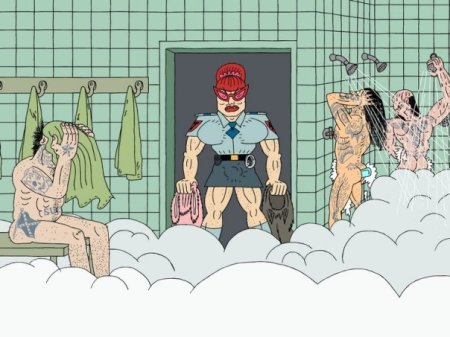 6:30 pm ($5): The appealing Veronica Osorio makes her first attempt to fly solo by performing as five gals who win a chance to be The First Woman on the Moon; plus for the other half of this double-bill, a show hoping to join the UCB West schedule via the audition series Spank

[TOP PICK] 7:00 pm ($12): Mark Douglas, Todd Womack, and Anastasia Douglas, the creators of one of the Web’s most successful series ever (over 250 million visits on YouTube), perform some of their greatest hits live on stage at 92Y Tribeca (200 Hudson Street): Key of Awesome

[TOP PICK] 7:30 pm ($5): “If you were alive in the 70’s, you may have attended some ‘Key Parties’ where you were randomly paired with someone to go home with and engage in free spirited coitus. (Today we either stay at home alone or congregate at an improv theater.) Key Party combines the 70’s arrangement with modern anxiety, exploring the rich moments leading up to that act of coupling and the fallout that follows” at UCB East with stellar comics Laura Grey, Jordan Klepper, and guest improvisors: Key Party; plus in the second half of this double-bill, improv troupe Thank You, Robot

[TOP PICK] 8:00 pm ($5): A smart troupe consisting of writers for The Onion perform their best sketches: Pangea 3000: 12 Years of Hard Work; and in the other half of this UCB West double-bill, a sketch play about the opening of a trendy restaurant that serves nothing but raw pig, written with wit and bite by Leila Cohan-Miccio (Stone Cold Fox), directed with style by Caitlin Tegart (MTV, PBS, ESPN), and performed superbly by hot comedic actress Lauren Conlin Adams (and special thanks to Sarah Gainer for the photos above): Pig: A Restaurant

[$] 8:00 pm ($38.25 & 2-drink min.) An Iranian-American stand-up (for a sample set, please clickhere) who’s a founding member of the Axis of Evil Comedy Tour that featured top Middle Eastern-American comics, and an actor who’s performed on ABC’ s Better off Ted and Knights of Prosperity, FOX’ s Life on a Stick, HBO’s Curb Your Enthusiasm, NBC’s The West Wing and ER, and many other shows & feature films, headlining tonight through Sunday at the Carolines Comedy Club: Maz Jobrani

[TOP PICK] 9:00 pm ($12): Ann Carr hosts the debut of the second season of her Web series The Actress, joined by comedic guests relating their own horrible experiences in the biz, along with music from Alana Amram, all at 92Y Tribeca (200 Hudson Street): Ann Carr’s The Actress: Season 2 Premiere

9:00 pm-Midnight ($7 for the entire evening): Magnet house troupes The Boss, Hello Laser, The Boss, Phooka, and Junior Varsity performing improv, followed by improv competition Inspirado(like UCBT’s Cage Match, but with a game-like challenge component), tonight with musical improv troupes battling it out at 11:00 pm: The Magnet’s Night Out

9:30 pm ($8): “A 17-person middle school talent show created and performed by two people—Jo Firestone and Dylan Marron—who like themselves more now that they’re older. A comedic tribute to the best three years of our lives, and a comedic play for anyone who ever thought it couldn’t get any better than prank calls and slow-dancing” at The PIT: Ridgefield Middle School Talent Nite

9:30 pm (no cover, 1-item min.): Carol & Sean are getting married on 11/7, so I’m not sure there’s a show this week; but please click here for updated info on this normally weekly show at Luca Lounge (222 Avenue B off 14th Street) hosted & produced by soon-to-be-newlyweds Sean Crespo & Carol Hartsell: Lasers in the Jungle

9:30 pm ($5): Improvisors (not announced) make up one-act plays on the spot at The PITdownstairs lounge, produced by Dan Hodapp & Micah Sherman: The Scene

[FREE] 9:30 pm: Sharp improvisors from UCBT, The Magnet, The PIT, and/or more try their hand at stand-up at The Creek in Queens’ Long Island City: Improvisers Standing Up