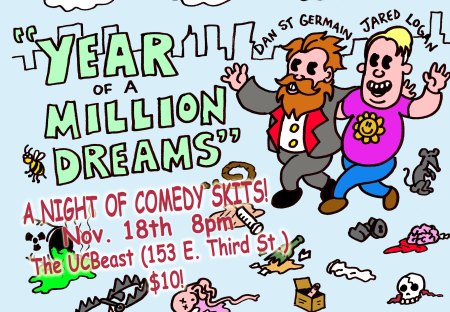 [FREE] 6:00 pm: An open-mic show on a lottery system (sign-ups start at 5:30 pm) at The Creekupstairs theatre in Queens’ Long Island City with hosts Mike Recine and Annie Lederman: The Shinebox

[TOP PICK] 7:00 pm ($8): “Coinciding with the nationwide midnight screening of Twilight Saga: Breaking Dawn Part 1, a bunch of PIT improvisors who know nothing about the story reenact scenes from the book as narrated by a true fan. Team Jacob. Team Edward. Who wins? Nobody…:”Twilight by Dummies

[TOP PICK] 7:30 pm ($10): In one of the finest scripted shows to ever grace UCB Chelsea, troupe Stone Cold Fox performs hilarious parodies of off-off-Broadway theatre, as well as some of the very best sketches it’s crafted over the years, in a tight hour-long production directed by comedy genius Neil Casey (who, after also recently directing stellar one-person shows by Kate McKinnon and Mike Still, apparently can do no wrong), featuring delightful performances by Fran Gillespie, Molly Lloyd, D’Arcy Carden (watch for these three gals playing existential Truth or Dare), John Murray, Nate Smith, Brandon Scott Jones, and Jonathan Fernandez, and the writing of Leila Cohan-Miccio, Evan Greenspoon, Brandon Gulya, Matt Hunziker, Owen Parsons, and Michael Trapp. Don’t miss one of the sharpest and funniest comedy shows of the year from the first sketch troupe (vs. improv troupe) to ever be honored with an ongoing spot on the prestigious UCBT weekend schedule: Stone Cold Fox: This Is Not Art

[TOP PICK] [$] [DISCOUNTED] 8:00 pm ($35 using discount code FTBBOX online or at the box office): One of my favorite FringeNYC shows (for my 2006 review, please click here) is finally enjoying a commercial run. The mostly-true tale of a man who became the toast of Paris by making music with his ass—executed by a Broadway-caliber cast, and with several memorable show-stoppers—is playing at Sofia’s Downstairs Theater (221 West 46th Street): The Fartiste

[$] [DISCOUNTED] 8:00 pm ($20 [vs. $25] online or at the box office using discount code BOOK): Telly Savalas returns to life to entertain you and provide life guidance in this 50-minute show that was a hit at FringeNYC 2011 and is now enjoying an open-ended Friday night run at the Soho Playhouse’s downstairs Huron Club. The script is at times very smart, especially in its choices of hilarious video clips and music tracks from the real Savalas…who, in his more intense moments, apparently rivaled William Shatner at his silliest. But even when Hunter Nelson’s writing isn’t consistent, actor Tom DiMenna—who is a professional comic with great timing and skill at engaging an audience—will keep you entertained: Who Loves You, Baby?

8:00 pm ($10): A PIT improv troupe making up a musical on the spot after a friendly greeting: Hello; plus in the other half of this double-bill, troupe Epic Beards

[TOP PICK] 8:00 pm ($15): This acclaimed 10-year-and-counting sketch troupe has “amassed a cultish following and a cast who blindly throw themselves into the most questionable of onstage situations, bless their black little hearts….join them for a hilariously unsettling look at growing older, having children, killing your dreams, and settling.” For examples of the troupe’s work, please clickhere and here, and then come to The PIT downstairs lounge to see Spurn

[TOP PICK] [$] 8:30 pm ($18): The winning team that created Pope!: An Epic Musical (a big hit at last year’s FringeNYC) and The Spidey Project (a media sensation) is now developing a pirate musical at The Magnet about “the dashing young hero Declan as he seeks out the vicious Martin La Foe, the second most famous pirate ever,” with book and lyrics by Justin Moran & Jon Roufaeal, and music by Adam & Matt Podd: Nightfall on Mirango Island

[$] 8:30 pm & 10:30 pm ($25 & 2-drink min.): A stand-up who hosted FX’s The X-Show and starred in Hurt Bert, and also starred in his own hour-long special for Comedy Central, headlining tonight and Saturday at the Gotham Comedy Club: Bert Kreischer

[TOP PICK] 9:00 pm ($10): Some of the finest improv in NYC from UCB Chelsea’s all-star members of The Stepfathers

[TOP PICK] [$] [DISCOUNTED] 9:00 pm & 11:00 pm (FREE TICKETS if you reserve in advance by calling (212) 260-2445 and mention HyReviews.com, but there’s still a 2-drink min. per person): Todd Barry (one of the finest stand-ups on the country; David Letterman, Conan O’Brien, Comedy Central Presents, FX’s Louie, HBO’s Flight of the Conchords and Bored to Death, Adult Swim, feature films The Wrestler and Pete Smalls is Dead) and other NYC stand-ups performing at the only comedy club in the East Village: Eastville Comedy Club

9:30 pm ($10): Duo Andy Emeritz & George Lakis performing at The PIT downstairs lounge “a musical comedy about America’s once greatest boy band. In the 80’s, Five Alive was on top of the world…until they were fleeced by their manager. Years later, their now-deceased manager’s fortune is up for grabs to the first of his washed-up bands to score a number one single. With their chart-topping ‘Kiss You With Tongue’ a distant memory, Five Alive reunites as a duo of desperate has-beens, exploring a montage of hilarious original songs and classic 80’s tunes for a final shot at fame and redemption:” Five Alive! The Musical

[$] 9:30 pm ($15): A fundraiser for raising awareness about men’s health issues (with a special focus on cancer) featuring 23 NYC comics performing at The PIT upstairs theatre—and somehow it’ll all tie into November being the official month for moustaches: Movember Live

11:00 pm ($5): Six stand-ups you might not have heard of and and three judges who may or may not be well-known in a competition at The PIT—which is a theatre that isn’t really associated with stand-up. So this is a show I don’t quite understand, but maybe you’ll have fun anyway: The PIT Stand-Up Competition