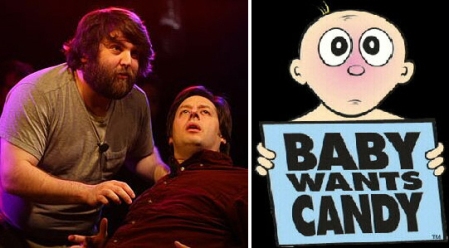 Week after week, world-class improv is delivered by the gutsy stars at Death by Roo Roo; and week after week, a stellar comedy troupe makes up a musical on the spot at Baby Wants Candy...

...while Kevin Pollak continues to slay at Carolines

6:00 pm ($5): Improv troupes GCA, Ryanna, and Double Date at The Magnet kicking off your Saturday evening: The Rundown

[FREE…plus FREE DINNER!] 7:00 pm: NYC stand-ups David Sidorov, Jack Quaid, Hallie Haglund, Andrew Tavin, Mookie Thompson, and Lucas Molandes performing at CultureFix (9 Clinton Street; take F subway to Delancey or J/M/Z to Essex) hosted by Aaron Glaser & Danny Jolles…plus “come at 6:30 and get some free dinner! CultureFix opens its one pot staff dinner to the public, but you gotta get there early cause it goes fast. Last time it was shrimp stew over grits; CultureFix does not fuck around:” Comedy Night at CultureFix

[TOP PICK] 10:30 pm ($10): Charlie Todd, Jim Santangeli, D’Arcy Carden, and/or other stellar improvisors at UCB Chelsea interview an audience member about where he or she grew up and then create an entire show based on the mini-bio: The Curfew: Not From Around Here

[TOP PICK] Midnight ($5): A talk show at UCB East hosted by the razor-sharp writer/performers of Pangea 3000 (who also write for The Onion), with guests Steve Saturn (actor), Michael Che (stand-up), and Amy Vlastelica (junior exhibition & lighting designer at the American Museum of Natural History): The Night Night Show with Pangea 3000

[FREE] Midnight: NYC stand-ups (not announced) participate in the fake taping of a bad late-night TV comedy show at The Creek upstairs theatre in Queens’ Long Island City with host Brad Steuernagel: Comedians Off Of the Leash