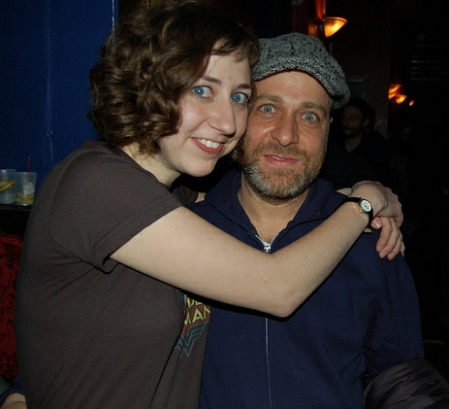 …and comedy giants Kristen Schaal & Jon Benjamin (above), Jon Glaser, and more perform in Brooklyn at Heart of Darkness

6:00 pm ($5): Improv troupes Cyclone, Sad Kids, and GCA at The Magnet kicking off your Saturday evening: The Rundown

[TOP PICK] 7:30 pm ($10): Charlie Todd, Jim Santangeli, D’Arcy Carden, Chelsea Clarke, and/or other stellar improvisors at UCB Chelsea interview an audience member about where he or she grew up and then “turn that town’s tourist attractions, landmarks, hangouts, local celebrities, urban legends, and more into a hilarious show made up on the spot:” The Curfew: Not From Around Here

[$] 8:00 pm ($30): An award-winning sketch troupe that uses song, movement, and clever scenarios to turn familiar situations & rituals on their head (for a video about how boys will be girls, please click here): The Harvard Sailing Team

[$] 8:00 pm ($53 & 2-drink min.) Former co-host of The Man Show and Loveline, and now host of one of the most popular comedy podcasts on the Net, headlining one last night at the CarolinesComedy Club: Adam Carolla

[TOP PICK] 8:30 pm ($10): Liz Miele (Conan O’Brien, Comedy Central), Phoebe Robinson (100 TV Shows To See Before You Die), Susan Prekel (Comedy Central), Amber Nelson (sketch troupeThunder Gulch, co-host of Late Night Stand and Mustache Party), Justy Dodge (co-host of Too Much Information on comicalradio.com; “I was kind of a tomboy growing up. Like, I had Barbies, but only because my Ninja Turtles needed bitches;” for dark bio video, please click here) performing at UCB East hosted by Kara Klenk: If You Build It

[TOP PICK] 9:00 pm ($8): From the producers of The Scene, improvisors—tonight including Casey Jost & Jodi Lennon— make up one-act plays on the spot at The PIT downstairs lounge: Act One

[FREE] 10:00 pm: Stand-up, sketch, and who knows what else at The Creek upstairs theatre in Queens’ Long Island City hosted by a stand-up/sketch duo: Team Submarine and Friends

[TOP PICK] 11:00 pm ($8): “Jack Dishel is best known as a songwriter and musician, touring all over the world performing as Only Son and also playing lead guitar in The Moldy Peaches. This year he’s exploded onto the comedy scene, doing a two-month run of hour-long shows at the Sidewalk Cafe—without ever repeating material. It’s sometimes hilarious, sometimes dark, but always interesting. Whether speaking as one of his many characters or in his own voice, his ideas come through loud and clear, and it’s a fast hour. Let’s see what happens when Dishel brings the drunken night club insanity into The PIT upstairs theatre:” Jack Dishel: And Then Things Got Weird

[TOP PICK] Midnight ($5): Improv is dominated by guys…and for no good reason. A way to help remedy this situation are shows like this one, which is an open improv jam for any gal wanting to participate, at any experience level. This new monthly UCB Chelsea event is helmed by the wonderful Shannon O’Neill Shannon O’Neil (breathtakingly innovative, lighting-quick, and fearless improvisor/sketch comic and rising star; The Stepfathers, Diamond Lion): The Lady Jam

This entry was posted on Saturday, June 16th, 2012 at 10:31 am and is filed under Best New York Live Comedy Shows. You can follow any responses to this entry through the RSS 2.0 feed. You can leave a response, or trackback from your own site.