It’s a good night to be in Brookln, with The Daily Show’s Wyatt Cenac debuting weekly stand-up show Night Train… 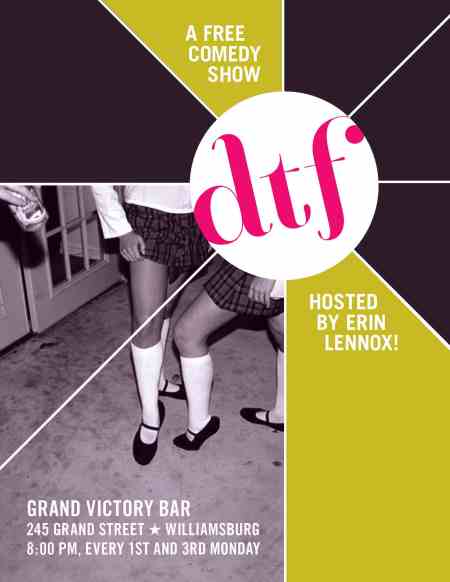 …and Erin Lennox hosting a superb group of stand-ups, including Jared Logan, Mike Lawrence, and Mark Normand, at DTF

[TOP PICK] [FREE] 6:00 pm: Weekly open-mic storytelling show, with audience members chosen from a bucket of names getting to tell tales for 8 minutes each at The PIT downstairs lounge along with host Jake Hart—and tonight might feature some tales of Sandy: The Dump

7:00 pm ($8): A group of actors and improvisors attempt to duplicate the success of UCBT’s Gravid Water by putting improvisors in the middle of classic theatre scenes at The PIT upstairs theatre. UCBT uses top Broadway and improv talent for its show, making it extraordinary. The participants of this show are unannounced; but the format is so strong that this might work anyway, despite the awful title: The Actor’s Worst Nightmare

[TOP PICK] 8:00 pm ($5): Inspired by the popular blog My High School Boyfriend Was Gay, this superb show at UCB East “celebrates our most tragic, hilarious, and heinous teenage memories, full of chaste hugs, Grease sing-alongs, and trips to the stage door to accost the cast of Rent,” with true stories tonight from Alysha Umphress (Broadway: American Idiot, Bring it On), Brent Sullivan (It Gets Betterish, Fag Life), Michelle Wolf, and Adam Lehman, with hosts Damian Bellino, and the super-delightful Camille Harris whose piano playing and singing will make you grin and dance in your seat: My High School Boyfriend Was Gay

8:30 pm ($5): At The Magnet, sketch comedy from a small army of young comics about tomorrow’s election: We Need a President

9:00 pm ($8): “Becky Flaum thinks she’s Julia Roberts. And Sandra Bullock, Meg Ryan, Drew Barrymore, even Katherine Heigel. But her high cinematic hopes for her love life get in the way of reality on her quest to find the perfect co-star.” This one-woman show is at The PIT upstairs theatre: Hopeless Romantic Comedy

[TOP PICK] [FREE] 11:00 pm: Some of the finest comics in the world—who are no longer being announced in advance, but it’s virtually always a great lineup—at UCB Chelsea probably hosted by someone wonderful: Whiplash

[FREE] 11:00 pm: If you’re an audience member who loves stand-up, Monday at 11 should be Whiplash! night (see listing above). If you’re a comic who couldn’t get booked on UCBT’s all-star show, though, you can opt to instead practice your skills at this exceptionally supportive stand-up open-mic at The PIT upstairs theatre hosted by Jared Reed: Fresh