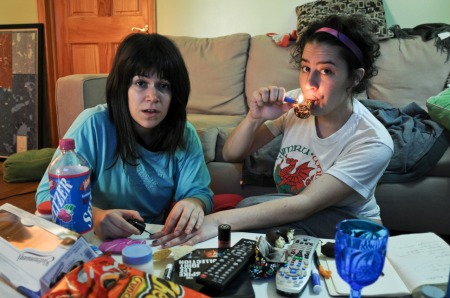 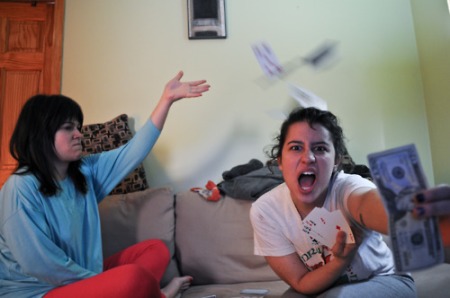 …at UCB Chelsea for their Stoned Sleepover Party

[FREE] 6:00 pm ($5): Claire Ayoub interviews comedians over tea and coloring from up-and-coming illustrators in this on-stage version of her In Too Steep podcast, with this evening’s theme Katie Fisher Day Day at the UCB East theatre: The In Too Steep Tea and Coloring Party

[TOP PICK] 8:00 pm ($5): One of the best and one of the worst shows currently at UCB Chelsea. Starting with the positive: Four-gal comedy group Georgie Aldaco, Danielle Gibson, Viviana Olen, and Katie Simon perform a series of surreal sketches that are both unsettling and charged with comedic energy. A long bit about a mother threatening to do something surprising to her husband and son is an instant classic (when you see it, you’ll have no doubt what sketch I’m talking about…). The show could be greatly improved with periodic nuanced emotion to create a roller coaster effect—right now the audience is hit with surface shock after shock, which after a while desensitizes and loses impact—but if you’re open to the purity of conceptual comedy that challenges your sanity, you’ll enjoy Former Business Partners: Everything Must Go…

…and in the other half of this double-bill, frankly, the worst scripted UCBT show I’ve seen over the past year—terrible writing, acting, direction, a perfect storm of bad. The folks involved are very nice, though; sometimes things just don’t work out…: The State vs. Josh: The Trial of the Millennial’s

FREE] 8:00 pm: NYC stand-ups do sets “and then have a discussion about what’s going on in the world and the mysteries of life” at The Creek upstairs theatre in Queens’ Long Island City, hosted by Chris Laker: The Show

8:00 pm ($5): The debut of a stand-up show (comics not announced) that includes a bass guitar performer to set the tone at The PIT downstairs lounge: Stand-Up Bass

[TOP PICK] 9:30 pm ($5): Abbi Jacobson & Ilana Glazer created Broad City as a Web series, which was then picked up for development as a TV series for FX…and is also a monthly stage show at UCB Chelsea. Tonight’s theme is Stoned Sleepover—and you’re requested to “be sure to wear PJs…no joke”—for this “delicately crafted hour of fun:” Broad City Live

[TOP PICK] [FREE] 11:00 pm: The wonderful Sasheer Zamata (Doppelganger, Bucky, The Prom) hosts as many as a dozen guests packed into 75 minutes performing stand-up, improv, sketch, and occasionally acts that defy categorization. The level of talent can vary wildly, but for some (like me), that’s part of the laid-back fun; and this is often one of the most amazing comedy shows in town. (Tonight’s scheduled guests haven’t yet been announced, but please check for an update—that doesn’t start with Gary Vider, the top of the list from last week—by clicking here.) Come support the experimentation, and periodic magical surprises, that this uniquely organic rollercoaster of a weekly show at UCB Chelsea makes possible—and don’t forget to toss $1 in the bucket on your way out: School Night