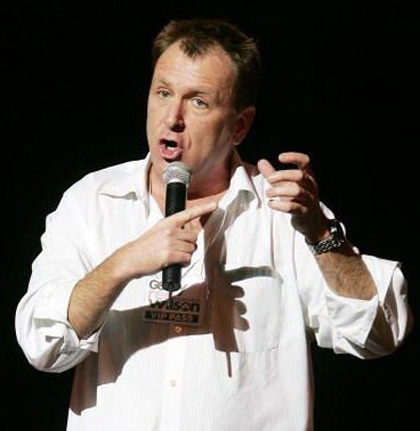 …and D. L. Hughley headlines one last night (Sunday’s performance has been canceled) at Carolines

[TOP PICK] [$] [DISCOUNTED] 7:00 pm & 9:00 pm & 11:00 pm (FREE TICKETS if you reserve in advance by calling (212) 260-2445 and mention HyReviews.com, but there’s still a 2-drink min. per person): Ted Alexandro (one of the very finest stand- ups in the country; David Letterman, Conan O’Brien, Jimmy Kimmel, two Comedy Central Presents half-hour specials; comedy album I Did It; frequently opens for Louis C.K.), Judah Friedlander (one of the quickest minds and very finest stand-ups in comedy; 30 Rock, Meet the Parents, Along Came Polly, author of How to Beat Up Anybody), Nikki Glaser (former co-star of MTV’s The Nikki and Sara Show; Conan O’Brien, Jay Leno, Last Comic Sanding, Comedy Central Half Hour; podcast You Had to Be There), Andrew Schulz (MTV’s Guy Code, Girl Code, Failosophy), and more performing at the only comedy club in the East Village: Eastville Comedy Club

[$] 7:00 pm ($12): “Every family has a black sheep, but the Damn Family is all black sheep. When they get together, things get weird with not-so-wholesome, not-so-family-friendly sketch comedy fun” at The PIT upstairs theatre: Damn Family

[FREE] 8:00 pm: This show-and-tell event encourages you to “bring your weird family photos, demonstrate how many flips you can do in a row, reveal the tattoo your uncle gave you at last year’s family retreat—share anything crazy, kooky, strange or insane; the best of the best will win prizes and bragging rights,” plus stand-up from Jeff Wesselschmidt, Sue Smith, Eli Sairs, and Naomi Karavani, all at Brooklyn’s Over the Eight (594 Union Ave) produced by Lukas Kaiser and hosted by Toby Scales & Sean O’Reilly: Showcasey Jones

[TOP PICK] [$] 9:30 pm ($12): NYC’s heavy metal version of a sketch troupe, which provides odd, unsettling, and fearless dark comedy; in 2011 won the ECNY Award for Best Sketch Group; was recently written up by Jason Zinoman in The New York Times; and is spearheaded by Henry Zebrowski, who’s a co-star of Wolf of Wall Street, performing at The PIT upstairs theatre: Murderfist

9:30 pm ($10; includes free drink): Get dressed up and dance with some of the top comics and comedy instructors at The PIT downstairs lounge for this once-a-year event, which includes superb dancer Jamie Leelo: PIT Prom 2014

[TOP PICK]11:30 pm ($5): Sketch comedy that aims to have you “laughing until blood pours out of your throat and eyes and you die and you go to hell and you’re like ‘god damn that was worth it!’ to Satan and he’ll be like ‘Yeah, I know, I was there, it was dope'” at the UCB East theatre: O.S.F.U.G. A Fast Fuckin’ Sketch Show