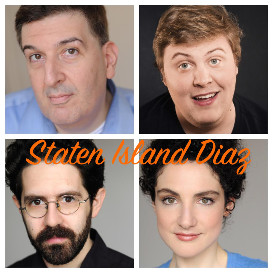 7:00 pm ($5): An all-gal improv show mixing women from The PIT’s free improv nights with those on PIT improv house teams—and that includes such talents as Ashley Ward—at The PIT upstairs theatre: Ladies of the PIT

[TOP PICK] 7:30 pm ($10): “Created in 1995 at the iO Theater in Chicago, The Armando Diaz Experience is the longest running improv show ever. A guest monologist takes a suggestion from the audience and shares true personal tales. These stories are then brought to life by a rotating cast of improv all-stars—and occasionally Armando himself” at The Magnet theatre: The Armando Diaz Experience

[TOP PICK] 8:00 pm ($10): A freestyle rapping long-form improv group that includes such talents as Evan Kaufman (Your Love Our Musical) takes the stage for nearly an hour at The PIT downstairs lounge: North Coast

[TOP PICK] [$] [DISCOUNTED] 9:00 pm ($24.75 via Goldstar [vs. $29 at the door]): The only FringeNYC show to ever include a barbershop quartet singing about alcohol and three rounds for each audience member (for my full review, please click here) is now playing as a perfect show for a date every Thursday, Friday, and Saturday night at the West Village’s Soho Playhouse (15 Vandam Street, in the downstairs Huron Club): The Imbible: A Spirited History of Drinking

9:30 pm ($10): A one-woman show by Jamie Aderski in which she “presents to you the things she wants to hide…there will be cookies, charts and crafts, people from her past, and song,” plus an opening act by magician David Frasure, all at The PIT downstairs lounge: I Just Disappear

[TOP PICK] 10:30 pm ($10): Long form improv about the behavior of a theatrical troupe both on-stage and off-stage, revolving around a different show biz theme each month, at The Magnet theatre: The Cast

[FREE] Midnight: “Bringing comedy back to its vaudeville and cabaret roots, a no holds barred strictly R-rated comedy show featuring filthy stand-up and storytelling sandwiched between some of the hottest burlesque acts in the city” at The Creek upstairs theatre in Queens’ LIC (10-93 Jackson Avenue) hosted by Charles Stunning & Freddie Heinemann: Raunchy Risque

[FREE] 4:00 pm: An unusually early weekly open mic stand-up show (“starts late enough to sleep off that hangover but ends just in time to begin a new one”), with sign-up at 3:30 pm, at The Creek upstairs theatre in Queens’ LIC (10-93 Jackson Avenue) hosted by Raj Sivaraman & Sam Evans: The Amateur Hour