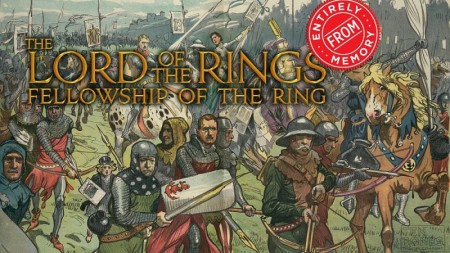 Eight performers from the Ten Bones Theatre Company attempt to recreate one of the most epic movies ever made, Lord of the Rings: The Fellowship of the Ring, with each using only what he or she can remember from seeing the film just once. To add to the fun are a few rules: “Performers must incorporate lines written by the audience; performers must incorporate any sound effect played by the tech booth; one lucky audience member will be given a bell that they can ring three times—once rung, the actors must create a scene that has no business being in Raiders but makes perfect sense given where they are in the story:” The Fellowship of the Ring…Entirely From Memory (9:30 pm, $10, The PIT Upstairs Theatre at 123 East 24th Street)

8:00 pm ($5): In this comedic play based on the Serious Business webseries, “a man without any experience or know-how decides to run for Condo Board President of his apartment building with the help of his eccentric campaign manager, taking on the entire building establishment” at The PIT upstairs theatre: The Making of an American President

8:00 pm ($10): Sketch comedy written and directed by John McDermott, and performed by John and six other cast members, at The PIT Loft (154 West 29th Street): Bingo

9:00 pm ($10): This double-bill kicks off with a play set in the future about the National Football League; and then “serious musician and outrageous comedian Tommy McNamara performs an intimate, unplugged set” at Brooklyn’s The Annoyance Theatre (367 Bedford Avenue; take J/M/Z to Marcy Avenue or L to Lorimer Street): Infinite Jets and Tommy McNamara: Unplugged in New York

7:30 pm ($6): A storytelling open mic, with those whose names are pulled from a hat getting 6 minutes on stage, on this month’s topic Holidays in Hell, at Astoria Queens comedy venue QED: A Place to Show & Tell (27-16 23rd Avenue) produced by Lori Baird and guest-hosted by Julie Polk: Talk Therapy Stories: Holidays in Hell