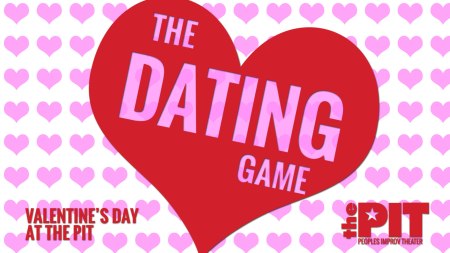 At this terrific annual PIT tradition, “Three hot New York singles will ask outrageous questions to determine which of our hilarious PITizens will be their Valentine. The winners get a date and the losers get prizes that are way too inappropriate to mention here. Two winning couples from past shows have gone on to get married and have babies!” Really, how many shows can say that?: The PIT’s Dating Game (7:00 pm, $7, The PIT Mainstage at 123 East 24th Street)

8:00 pm ($7): Making great use of UCB East’s previous incarnation as an indie movie theatre, tonight features screenings of select films running five minutes or less—most of them funny—crafted in the style of TV pilots. The shorts receiving the most audience votes get to continue with additional episodes, while the others are “canceled” at Channel 101

8:30 pm ($10): Sketch and improv comics “create a brand new show in only one week, and then perform improvised sketches based off of your suggestions, just like The Second City used to do” at The PIT Mainstage: The Vagina Valentines

9:30 pm ($5): Superb improvisors and guest improv groups join host Skycopter (which includes the incredible David Carl) to make up one-act plays on the spot at The PIT Underground: Act One

[FREE] 10:00 pm: NYC stand-ups (not announced) perform for this show that likes to brag about how great it is at Queens LIC’s The Creek upstairs theatre hosted by Brian Bahe & Stu Melton: Hyperbole

11:00 pm ($5): Going beyond the classic Harold, improv group Brightlight performs different types of longform at the UCB East theatre: Harold on the Run

6:00 pm ($3): A chance for gals to get on stage and improvise with veteran female comics at The PIT Loft (154 West 29th Street) hosted by Blair Silverman and friends: Lady Jam

[FREE] 10:15 pm: In this free Magnet show, audience members can join in with musical improv group Warm Blooded to make up stories in song on the spot: Musical Magnet Mixer

11:00 pm ($5): Ten stand-ups whose names are drawn from a “golden bowl of destriny” will be given stage time, along with a few invited stand-ups, at The PIT Underground hosted by Will Purpura: Bring It

This entry was posted on Tuesday, February 14th, 2017 at 12:56 pm and is filed under Best New York Live Comedy Shows. You can follow any responses to this entry through the RSS 2.0 feed. You can leave a response, or trackback from your own site.