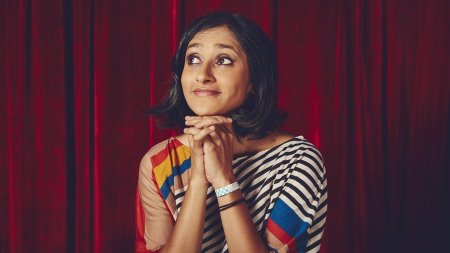 …or see extraordinary character comic and rising star Filip Jeremic (above; co-star of UCB’s Characters Welcome) & Brittany Lee McDonald create a myriad of extreme and memorable characters, with guests John Swan & Zoob Fernandez helping out on this month’s theme of Not Human at The PIT Mainstage hosted by Brian Michael: The Wigging Hour

[TOP PICK] 8:00 pm ($7): At the UCB Chelsea theatre, a one-man play by Geoff Garlock about memories of a classic music festival: Rock and Roll Will Never Die…

[MEGA-TOP PICK] [FREE; reservations go quickly, but you can probably get in if you arrive early and are okay with standing] 11:00 pm: Some of the finest comics in the world—who aren’t announced in advance, but it’s usually a great lineup and often an extraordinary one—at UCB Chelsea typically hosted by Aparna Nancherla (one of the very best stand-ups in the country; co-star of HBO’s Crashing; former writer for Seth Meyers; Conan O’Brien, @Midnight, Comedy Central Half Hour, comedy album Just Putting It Out There): Whiplash

[FREE] 6:00 pm: Your chance to make up scenes in a 7-minute set with veteran improvisors who are supporting diverse voices at The Magnet theatre: Diversity Jam

[TOP PICK] [FREE] 8:00 pm: Walk-in open mic for telling stories or jokes about sex, desire, and romance, with each performer getting 7 minutes at The Delancey (168 Delancey Street) produced by Ames Beckerman: Safe Word: The Sexiest Open Mic in NYC

This entry was posted on Monday, April 3rd, 2017 at 2:25 am and is filed under Best New York Live Comedy Shows. You can follow any responses to this entry through the RSS 2.0 feed. You can leave a response, or trackback from your own site.