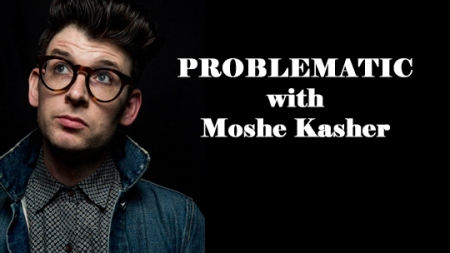 Don’t miss the debut of lightning-quick wit Moshe Kasher’s weekly half hour TV series Problematic, “a talk show that actually talks. Each episode will delve into a single topic of online outrage—impeachment, the dark web, ideological changes of heart, the liberal case for guns—and examine how it shapes our culture. With the help of experts, comedians, and questions from both in-studio and online audiences, Kasher will solve every problem that has ever existed by the end of the episode, bringing peace and harmony to the Internet once and for all while paving the way for a Winfrey/Schwarzenegger co-presidency in 2020.” Set your recording device to 10:00 pm on Comedy Central for Problematic…

…and live on stage, enjoy Mark Normand (one of the very finest stand-ups in the country; Conan O’Brien, Stephen Colbert, Comedy Central special Don’t Be Yourself, Comedy Central Half Hour, Inside Amy Schumer, Last Comic Standing, VH1’s Best Week Ever; comedy album Still Got It; opens for Amy Schumer)…

[TOP PICK] 7:00 pm-11:00 pm ($7 for the whole evening): In this 4-hour extravaganza, eight singing & dancing improv groups at The Magnet make up musicals based on audience suggestions, preceded at 6:00 pm by an improv jam open to the audience: Magnet Musical Megawatt

7:00 pm ($7): A showcase for brand new scripted shows—sketch, solo, readings, what have you—this week featuring sketch groups Moshpick and Sketchy at The PIT Underground produced by the wonderful Ronny Pascale and hosted by Shelby Slauer (a golden retriever; Funny or Die, Reductress, co-host of 2 Dumbs at Muchmore’s): Pilot Season

8:00 pm ($10): Sketch and improv comics “create a brand new show in only one week, and then perform improvised sketches based off of your suggestions, just like The Second City used to do” at The PIT Mainstage: Old School Sketch Show

8:30 pm ($5): “When an office full of big city escalator salesmen is given the news that all but two will be fired at the end of the week, the tough-talking escalator boys have to come up with a way to lift themselves up to a higher floor…or risk falling all the way down” written & co-starring Calvin Cole, Emily Duncan, and Jon Hudson at The PIT Underground: Glengarry Glen Escalator

9:30 pm ($7): Sketch group Mountain Rapids Soda performs a play in which oddball characters trapped together out on the high seas must uncover a killer in their midst at The PIT Mainstage: Boat Show Expo: A Murder Mystery

[FREE] 10:00 pm: A monthly stand-up show that books comics from the same original area (i.e., outside of NYC) to perform long sets at The Creek’s upstairs theatre in Queens’ Long Island City hosted by Trey Galyon: I’m Not From Here

11:00 pm ($5): Going beyond the classic Harold, group Mermaids performs whatever type of long form improv it likes at the UCB East theatre: Harold on the Run

[FREE] 6:00 pm: In this free Magnet show, audience members can join in with musical improv veterans to make up stories in song on the spot: Musical Magnet Mixer

10:30 pm ($3): A chance for you to get on stage and improvise at The PIT Loft (154 West 29th Street) hosted by the wonderful Ronny Pascale (PIT Associate Artistic Director): Tuesday After Class: Slow Jam

This entry was posted on Tuesday, April 18th, 2017 at 10:31 am and is filed under Best New York Live Comedy Shows. You can follow any responses to this entry through the RSS 2.0 feed. You can leave a response, or trackback from your own site.