Live taping of a new comedic podcast that aims to provide “a fresh perspective on politics through an examination of the big-time dicks behind the policies affecting our lives,” with guests Aparna Nancherla (one of the very finest stand-ups in the country; co-star of HBO’s Crashing and Netflix’s Master of None; former writer for Seth Meyers; Conan O’Brien, @Midnight, Comedy Central Half Hour, comedy album Just Putting It Out There; opens for Tig Notaro; hosts top weekly NYC stand-up show Whiplash), Amy Goodman (Host/Executive Producer of Democracy Now!, a daily award-winning news program airing on over 1,400 public TV & and radio stations worldwide; author of six New York Times Bestsellers), and Erika Andiola (former Press Secretary for Latino Outreach for Bernie 2016 and current Political Director for the campaign’s successor organization Our Revolution) sponsored by Jezebel, and hosted by Joanna Rothkopf & Prachi Gupta: Six Months Deep with Big-Time Dicks (7:30 pm, Free! if you RSVP, Brooklyn’s The Bell House at 149 7th Street; take R subway to 9th Street or F/G to Fourth Avenue)…

…and if you missed her debut last night, this is your second chance to enjoy the lovely and delightful Carmen Lynch (David Letterman, Conan O’Brien, Stephen Colbert, Inside Amy Schumer, Last Comic Standing finalist) performing an hour-long solo stand-up show in the West Village that Carmen will reprise at this August’s Edinburgh Fringe Festival: Lynched (8:30 pm, $5 plus 2-item food/drink min., The Fat Black Pussycat Lounge at 130 West 3rd Street)

Invaluable PIT Associate Artistic Director Ronny Pascale has been instrumental in keeping hundreds of PIT shows and festivals running smoothly and brilliantly. A sensitive artist and exceptionally hard worker who cares about every detail, Ronny Pascale has been a golden asset to The Peoples Improv Theater and to the NYC comedy community in general. Unfortunately, we’re about to lose him to Southern California. This show is part roast and part tribute as Ronny’s friends—Dana Shulman, Amelia Bienstock, Mehdi Barakchian, Kent Wilhelm, and more—bid him adieu in various comedic ways, produced by Jen Clark, musically directed by Mark Erenstoft (Broadway’s Avenue Q), and hosted by Will Purpura: The Memorial Remembrance of Ronny Pascale (7:00 pm; $10, The PIT Mainstage at 123 East 24th Street)… 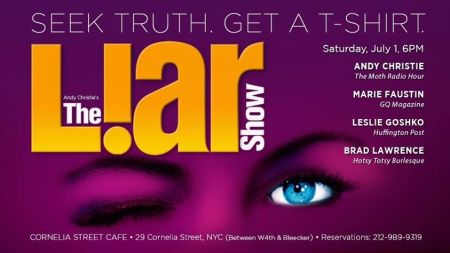 This entry was posted on Wednesday, June 28th, 2017 at 6:16 am and is filed under Best New York Live Comedy Shows. You can follow any responses to this entry through the RSS 2.0 feed. You can leave a response, or trackback from your own site.