All that said, my top NYC comedy recommendations for November (with more to come soon) include: 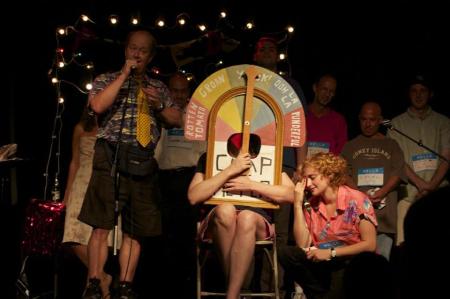 This wildly popular monthly pun competition is hosted by father-daughter duo Fred Firestone and Jo Firestone (one of the most relentlessly inventive comics in the biz; staff writer for Jimmy Fallon; radio host of WFMU’s Dr. Gameshow, co-host of Monday stand-up show Butterboy; co-author with Fred of #1 bestselling Punderdome: A Card Game for Pun Lovers). Enjoy the spectacle as 18 audience members—maybe including you—compete in Punderdome 3000 (Tuesday 11/7, 8:00 pm, $10, Brooklyn’s Littlefield at 635 Sackett Street; take R subway to Union Street. Note: If you can’t make it to the live stage, don’t despair; you can alteratively watch the live stream on YouTube)

It’s the fifth year of this annual 4-day PIT festival (co-created by Peter Michael Marino) devoted to over 100 new comedic solo shows. The only requirements for any production are that it’s a one-person show that’s funny and has never been performed in public before. The types of entertainment are therefore wide-ranging, encompassing sketch, characters, storytelling, stand-up, cabaret, music, dance, puppetry, magic, clowning, multimedia, and more. You can catch any show for $10; but the sensible thing to do is buy an all-you-can-see pass for $30, which gives you access to all shows throughout the fest: Solocom 2017 (Thursday 11/16-Sunday 11/19; $10 per show or $30 for an all-you-can-watch 4-day festival pass; The PIT Upstairs, Downstairs, and Attic Theatres at 123 East 24th Street and The PIT Loft at 154 West 29th Street)

The movie is being screened theatrically in NYC, LA, and Chicago starting Friday November 17th, and will then enjoy a wider release around the country. In NYC, advance tickets are available online at Regal Cinemas Union Square (850 Broadway at 13th Street), AMC Empire 25 (243 West 42nd Street off Eighth Avenue), and The Landmark (657 West 57th Street at Twelfth Avenue).

This entry was posted on Saturday, November 4th, 2017 at 9:12 am and is filed under Best New York Live Comedy Shows. You can follow any responses to this entry through the RSS 2.0 feed. You can leave a response, or trackback from your own site.