That said, my top NYC comedy recommendations for October 2018 (with much more to come) include: 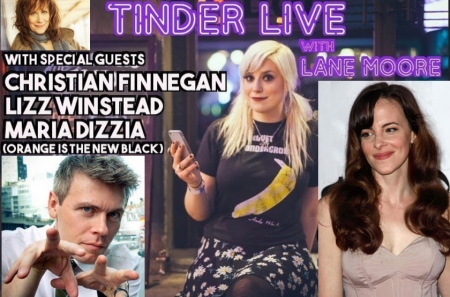 Saturday 10/6: A show celebrating the app that redefined online dating, with the lovely and quick-witted Lane Moore (middle; HBO’s Girls; Sex & Relationship Editor of Cosmo; writer for The Onion, McSweeney’s; author of upcoming book How to be Alone) going on a live Tinder safari for guys while a packed audience watches her every choice with fascination. Offering comments and suggestions are guest comics Maria Dizzia (right; TONY nominee; Orange is the New Black, The Blacklist, Master of None), Christian Finnegan (bottom left; creator & co-host of A&E’s Black and White; co-star of TBS’ Are We There Yet?; Conan O’Brien; three Comedy Central specials, Netflix special The Fun Part; TBS, VH1, MSNBC, Chappelle’s Show, The Today Show), and Lizz Winstead (top left; co-creator of The Daily Show; Air America). This show usually sells out, so I recommend nabbing tickets in advance online for Tinder Live (8:30 pm, $15, Brooklyn’s Littlefield at 635 Sackett Street; take R subway to Union Street)

Thursday 10/4-Sunday 10/7: New York Comic Con is one of the largest annual cultural events in the country—according to NYCC, last year it attracted over 200,000 people! In addition to comic books and anime, this ultimate fan fest features many comedians and spotlights lots of TV comedy series. I’ll be attending all four days; if you spot me, please feel encouraged to come over, say hey, and share your personal highlights from the fest: New York Comic Con 2018 (Thursday-Saturday 10:00 am-10:00ish pm, Sunday 10:00 am-5:00 pm; Jacob K. Javits Convention Center at 11th Avenue between 34th and 40th Streets)

Friday 10/12-Sunday 10/28 (plus outer borough shows 10/1-10/31): My favorite annual NYC event is the New York International Fringe Festival, which has grown to become a major force in New York theatre…and an absolutely wonderful experience for anyone who loves vibrant live shows. The largest multi-arts festival in North America, this 21st annual FringeNYC offers around 80 productions running from October 12th through October 28th at its primary hub in the West Village. In addition, venues in Brooklyn, Queens, Staten Island will be hosting FringeNYC-affiliated shows during the entire month of October. FringeNYC productions run the gamut, including theatrical comedy, theatrical drama, musical, opera, sketch, improv, dance, solo, puppetry, clowning, performance art, and children’s. I won’t be doing my usual comprehensive coverage this go-round (am juggling a lot of professional balls right now), but I’ll try to provide some guidance as the fest goes on: FringeNYC 2018

This entry was posted on Saturday, October 6th, 2018 at 6:35 am and is filed under Best New York Live Comedy Shows. You can follow any responses to this entry through the RSS 2.0 feed. You can leave a response, or trackback from your own site.