The heavens will shake tonight as Outlook of the Poet (above)...

...clashes with The Stepfathers at an all-star edition of the improv competition extravaganza "Cage Match"

[FREE] 9:00ish pm: Typically terrific NYC stand-ups performing on this weekly show at the Kabin Bar and Lounge hosted by Chesley Calloway and (throughout February) by the wonderful Brooke Van Poppelen:Comedy as a Second Language

[TOP PICK] 9:30 pm ($5): If you’re a fan of CollegeHumor.com, you can get a behind-the-scenes peak—plus comics Streeter Seidell & Jeff, Kevin Barnett, Sam Morril, and possibly some special surprises—at CollegeHumor Live

9:30 pm ($10): “Ever wonder how you become a writer for an Emmy winning TV show? So does J. D. Durkin. Since no one has told him, here is his one-man show performing all original material to become a writer for The Colbert Report. Durkin channels Colbert live on stage to present political punditry as only The PIT could do it…and only The PIT, since he was escorted off the Comedy Central premises:” Stephen Colbert: Hire Me

Outlook of the Poet (above) battles The Brothers Hines tonight at Cage Match; and Gilbert Gottfried headlines for one night only at Carolines

[TOP PICK] 8:00 pm ($28 online using discount code TMANIA): UK-based Daniel Kitson is one of the sharpest and most respected writer/performers alive. This is a rare opportunity to spend an intimate 90 minutes with a true genius of comedy. Please note this is a sprawling, detail-packed theatrical show, not stand-up…and not for every taste. But whether you’re ultimately grabbed by the story or not, it’s worth experiencing if only for Daniel’s lightning-quick flashes of humor. For example, at the performance I attended a woman sitting in the front row had the incredible gall to start reading. Daniel sweetly responded, “Ooh, that’s a subtle yet effective form of criticism. I’m certainly not cross with you, just too nosy about what you’re reading to plow on. Look, you’re still reading. What a lack of faith you have in live entertainment.” Place your faith in Daniel, check out the review from The New York Times, and catch this show running every day except Mondays through January 30th at Brooklyn’s St. Ann’s Warehouse (38 Water Street): The Interminable Suicide of Gregory Church

[TOP PICK] 8:00 pm ($8): Wonderful comic Kurt Braunohler “relates how he destroyed a 13-year relationship in the dumbest, most complicated way possible, with bar fights, naked men, walruses, and an audition for Sasha Baron Cohen” in the one-man show The Amish Guide to Fucking

8:00 pm ($5): A two-man sketch show from very smart and somewhat nerdy comics Dan St. Germain (MTV; quick-witted rising star) and Jared Logan (Last Comic Standing, Comedy Central, co-host of Righteous Kill) about history’s most infamous rivalries; and an interesting idea that doesn’t really get pulled off from adorable comics Geoff Garlock and Emily Strachan, in the double-bill They Hated Each Other and Gettin’ Quaid

9:30 pm ($8): “An improvised spoof on the process of rehearsing and performing a play takes the audience through the table read, bits of one of the rehearsals, and the opening night performance of a production that’s never been performed before and never will be again:” The Play Format

[TOP PICK] 11:00 pm ($5): Superb improv troupes Outlook of the Poet (Gavin Speiller, Ben Rodgers, and Jon Gabrus) and The Brothers Hines (Will and Kevin) competing for audience laughs and votes at the raucous Cage Match 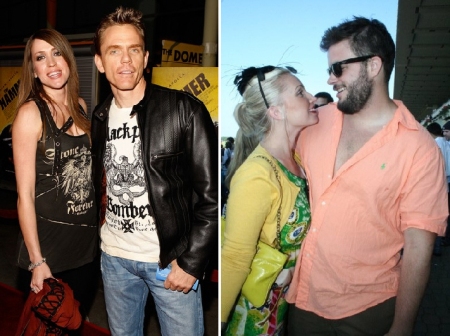 [MEGA-TOP PICK] 7:30 pm ($10): A spectacular and unforgettable demonstration of the artful power of mime when combined with a wickedly sharp modern sensibility, executed with great wit and style. Street performers have given mime a bad rep; but if you think about it, what mime does is boil a situation down to its essential elements, and then express those elements in a manner that’s instantly and universally understood. That’s really what art is all about; and that’s also what Billy the Mime does, often brilliantly. (For my review of his FringeNYC show in 2006, please click here.): Billy the Mime; plus a sketch show from UCBT troupe Thunder Gulch: Pop Culture Apocalypse

[TOP PICK] [$] [DISCOUNTED] 7:30 pm ($19.33 online if you use code VIPAUG, plus 2-item minimum): A quartet of friends who like to harmonize a cappella—on national TV series such asScrubs—sing and dance for one night only at the elegant Comix Comedy Club: The Blanks

[TOP PICK] [$] [DISCOUNTED] 8:00 pm Tuesday-Saturday ($39.50 online or at the box office using discount code PPBBOX): This is a show for which I have enormous affection; although my joy came from watching not only what occurred on stage, but the faces of the women in the audience turning stonier and stonier as they visibly projected the thought, “Dick tricks? This entire show really consists of dick tricks? All my suspicions about men have just been confirmed…” If you cherish bravery in performers, go forth to the 45 Bleecker Theatre (right next to the #6 subway’s Bleecker Street stop) and experience Puppetry of The Penis

[$] [DISCOUNTED] 8:00 pm ($19.33 online if you use code VIPAUG, plus 2-item minimum): A popular stand-up and friends performing at the elegant Comix Comedy Club: Colin Kane Unzipped

[TOP PICK] Midnight ($5): “Jon Gabrus is a rugby player from Long Island who loves to drink, which is the perfect trifecta for getting into ridiculous and dangerous situations. Come drink along with Gabrus as he shares some of his beer-soaked tales, like the time he ate a dead snake, or cooked a fork on a barbecue and branded himself…twice. There will plenty of drinking games, lots of audience participation, and an appalling lack of shame. His special guest bartenders Max Silvestri and Noah Garfinkel, and his lack of self-control, will join forces to create a night Jon probably won’t remember:” Blackout Drunk