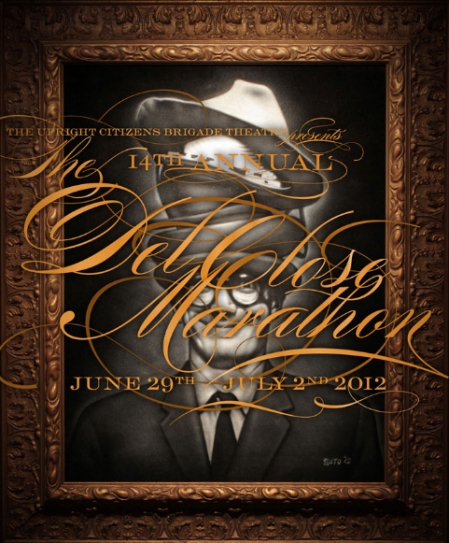 DCM is happening at seven different venues this year. I’ll mostly be at UCB Chelsea, but please know there are incredible things happening at every one of these stages. That noted, the following are some of the highlights I personally experienced from yesterday:

Also, while I love DCM, please note that if you’re a stand-up fan Ted Alexandro is one of the very, very best, and it’s just bad luck he’s opposite the most incredible improv event of the year. If you might care to take two hours away from DCM and see Ted at the Gotham Comedy Club (just a few blocks away from UCB Chelsea), he’ll deliver gold as well. For more, please click here.

FREE] 4:00 pm: An unusually early weekly open-mic stand-up show (“starts late enough to sleep off that hangover but ends just in time to begin a new one”) at The Creek upstairs theatre in Queens’ Long Island City hosted by Jhoel Walkowski & Evan Davis: The Amateur Hour

6:00 pm ($5): Improv troupes Accelerate Duo Prov, Pumpkin, and Orange Augustus at The Magnetkicking off your Saturday evening: The Rundown

[TOP PICK] [FREE] 7:30 pm: Adam Conover, Jermaine Fowler, and Jessica Watkins participate in this “comedy chat show with boundary issues” that has stand-ups perform sets and then be interviewed about their personal lives at The Creek upstairs theatre in Queens’ Long Island City hosted by Matt Ruby & Mark Normand (who says “all these guys were hand-picked because they’re funny and have some serious problems; when you read this lineup you’re gonna be like ‘oh yeah, that guy is a mess'”): We’re All Friends Here

[TOP PICK] 7:30 pm ($7): Improv master Ed Herbstman and five others “perform organic freeform improvisation in two mind-blowing parts; the only rule is that there are no rules” at The Magnettheatre: The Weave

8:00 pm ($10): Two of the most respected PIT improv troupes performing on this weekly double-bill—and occasionally with comedy giants Kristen Schaal and/or Kurt Braunohler participating—at the upstairs theatre: Big Black Car and The Baldwins

10:00 pm ($5): Improvisors make up a Quentin Tarantino movie at The PIT downstairs lounge for this new themed show: The Tarantino

[TOP PICK] [FREE] Midnight: This free show at The PIT upstairs theatre does a great job of describing itself: “Bad movies. We can’t stop watching them. Is it because the plot is so enjoyably paper-thin? Or maybe the acting is so deliciously cheesy? Whatever the reason may be, Oscar Montoya (Local 154, Aquarius) is inviting you to his house to watch all of his favorite so-bad-they’re-awesome movies.” Joining him is musical improv troupe Hot Diner to comment on one of the worst musical sequels of all time: Midnight Movie at Montoya’s Presents: Grease 2

[FREE] Midnight: NYC stand-ups (not announced) participate in the fake taping of a bad late-night TV comedy show at The Creek upstairs theatre in Queens’ Long Island City with host Brad Steuernagel: Comedians Off Of the Leash 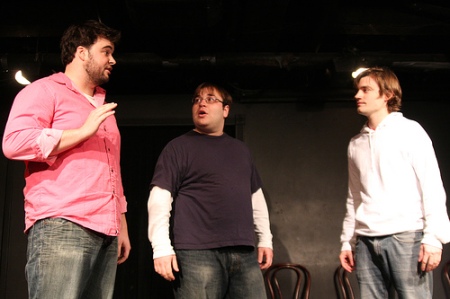 The heavens will shake tonight as Outlook of the Poet (above)... 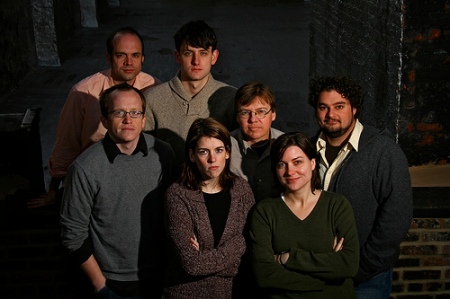 ...clashes with The Stepfathers at an all-star edition of the improv competition extravaganza "Cage Match"

[FREE] 9:00ish pm: Typically terrific NYC stand-ups performing on this weekly show at the Kabin Bar and Lounge hosted by Chesley Calloway and (throughout February) by the wonderful Brooke Van Poppelen:Comedy as a Second Language

[TOP PICK] 9:30 pm ($5): If you’re a fan of CollegeHumor.com, you can get a behind-the-scenes peak—plus comics Streeter Seidell & Jeff, Kevin Barnett, Sam Morril, and possibly some special surprises—at CollegeHumor Live

9:30 pm ($10): “Ever wonder how you become a writer for an Emmy winning TV show? So does J. D. Durkin. Since no one has told him, here is his one-man show performing all original material to become a writer for The Colbert Report. Durkin channels Colbert live on stage to present political punditry as only The PIT could do it…and only The PIT, since he was escorted off the Comedy Central premises:” Stephen Colbert: Hire Me