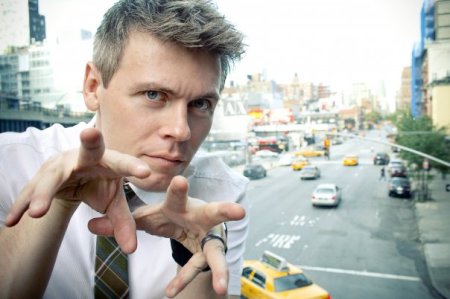 [TOP PICK] 6:00 pm ($5): Adam Lustick and Billy Scafuri are stellar members of world-class sketch troupeThe Harvard Sailing Team; and they’ve now branched out to form comedic rap group Snakes, along with unforgetable singer Chloé Weppe…who all won the 2010 ECNY Award for Best Musical Group! Check out their debut album, which can be downloaded from BillyandAdam.com, and then join them and their delightfully unusual guests at Snakes: FutureSex/LoveSnakes

[TOP PICK] 7:30 pm ($10): Kate Flannery (cast member of NBC’s The Office) and Scot Robinson “drag you down to the sleaziest lounge in town” in their sketch show The Lampshades

[TOP PICK] [$] [DISCOUNTED] 8:00 pm & 10:30 pm ($28.04 online if you use code VIPJUNE, plus 2-item minimum): A stand-up who’s performed three Comedy Central specials, is a commentator on MNBC’s Countdown with Keith Oberman and VH1’s Best Week Ever, and has appeared onChappelle’s Show and The Today Show, headlining through Saturday at the elegant Comix Comedy Club: Christian Finnegan

9:00 pm (no cover, 1-item min.): NYC stand-ups performing in Ochi’s Lounge at a gay-themed show hosted by Paul Case: The Back Room

[TOP PICK] 9:30 pm ($10): Always fresh and imaginative world-class sketch troupe that uses song, movement, and clever scenarios to turn familiar rituals on their head (for a video about awkward goodbyes at the end of a party, please click here): The Harvard Sailing Team

[TOP PICK] Midnight ($5): “Jon Gabrus is a rugby player from Long Island who loves to drink, which is the perfect trifecta for getting into ridiculous and dangerous situations. Come drink along with Gabrus as he shares some of his beer-soaked tales, like the time he ate a dead snake, or cooked a fork on a barbecue and branded himself…twice. There will plenty of drinking games, lots of audience participation, and an appalling lack of shame. His bartender, special guests, and his lack of self-control will join forces to create a night Jon probably won’t remember:” Blackout Drunk