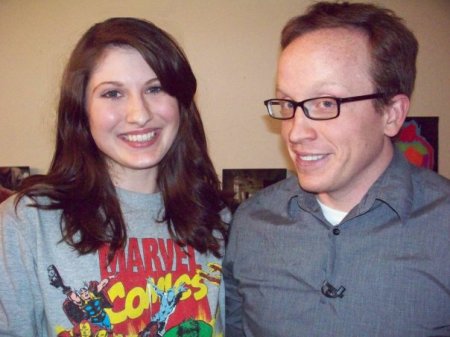 [TOP PICK] 7:30 pm ($10): Genius improvisor Christina Gausas and friends she originally made in Chicago—which include writers & performers from 30 Rock, The Colbert Report, and The Daily Show—plus a rotating cast of stellar visitors, all joyously declaring Let’s Have a Ball

[TOP PICK] [$] [DISCOUNTED] 8:00 pm & 10:30 pm ($28.04 online if you use code VIPJUNE, plus 2-item minimum): A stand-up who’s performed three Comedy Central specials, is a commentator on MNBC’s Countdown with Keith Oberman and VH1’s Best Week Ever, has appeared on Chappelle’s Show and The Today Show, and is currently the co-star of the TBS sitcom Are We There Yet?, headlining tonight at the elegant Comix Comedy Club: Christian Finnegan

[TOP PICK] 9:00 pm ($10): One of the gutsiest and most hilarious troupes in comedy history—and the Cage Match Champion for two years in a row!—genius improvisors Death by Roo Roo

[TOP PICK] [$] [DISCOUNTED] 10:30 pm ($15 both online and at the door using discount codePISANO, otherwise $20): A Chicago-based troupe that’s wowed audiences around the world with their skill at creating a completely improvised hour-long musical. The plot and characters, the musical accompaniment; even the song lyrics and the “choreography” are made up on the spot, with no pre-planned structure. Come see why BWC won a FringeNYC Award last August for Outstanding Unique Theatrical Event at the magical Baby Wants Candy

[TOP PICK] 11:00 pm ($10): Hilarious sketch duo Chris O’Neill and Paul Valenti describe themselves as “vaudeville gold for a 2010 crowd.” Whatever. They’re funny. Especially the bit with the nose. Come catch their latest material tonight at The Chris and Paul Show

[TOP PICK] 12:00 am ($5): One of the most fascinating performers in comedy—and star of the upcoming Comedy Central series Big Lake—hosting his own extravaganza, which goes beyond a stage show to have the makings of a hit MTV series—with guests including Shannon O’Neill, Will Hines, Bethany Hall, Don Fanelli, and the Kung Fu Monkeys…with this special show about The Art of Seduction, in which Chris promises “Love happens, people, and it’s going to happen hard at this show. Single audience members should be prepared to leave not single anymore:” The Chris Gethard Show