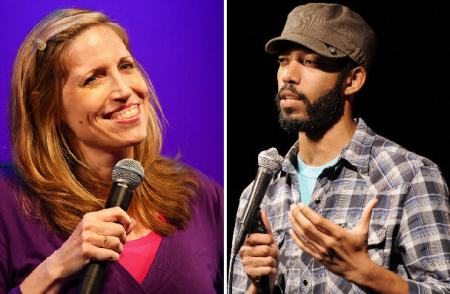 [TOP PICK] [$] [DISCOUNTED] 7:00 pm ($17.50 online with discount code NIFF): My #1 pick for the 2007 FringeNYC Festival, this wonderful group of actresses/improvisors portray characters as if they were in a play, but improvise everything they say and do. The luminous performers include Katharine Heller, Brenna Palughi, Lynne Rosenberg, and Lauren Seikaly, each of whom is immensely appealing and quick-witted. Further, they have an intimate, lovely chemistry with each other; and they’ve all committed to baring their personal lives, thinly disguised via their characters (hence the title’s Naked). As a result, this is one of the most honest and nuanced improvised shows you’ll ever see. Check out some videos of previous episodes here; and then grab tickets for tonight’s third installment at the Soho Playhouse of a 10-week Monday night run: Naked in a Fishbowl

[TOP PICK] 9:30 pm ($5): Mike Birbiglia (flat-out one of the finest stand-up comedians in the country; hour-long Comedy Central special What I Should Have Said is Nothing; two Comedy Central Presents half-hour specials; multiple appearances on Late Show with David Letterman andLate Night with Conan O’Brien; comedy CDs Two Drink Mike and My Secret Public Journal—Live; off-Broadway show Sleepwalk with Me) is preparing his one-man show for the Just for Laughs Festival—which means you can see a performance worth at least $40 for $5. Seats are sold out; but if you don’t mind standing, come and enjoy Mike Birbiglia: 60 Minutes of New Stories