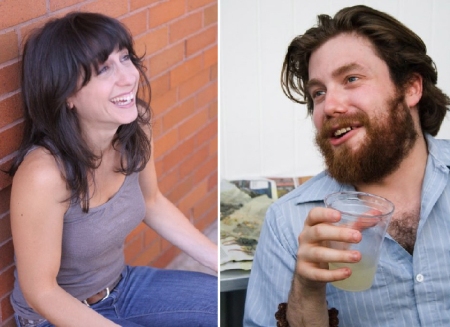 6:30 pm & 9:00 pm (no cover, 1-item min.): The perfect show for short attention spans—open-mic stand-up with 4½ minutes per set and 25 comics crammed into 2½ hours—with an early show hosted by Sean Donnelly & Blaine Perry at 6:30 pm, and an entirely different group of stand-ups hosted by Dan Cartwright & Dave Greek at 9:00 pm—at the Luca Lounge (222 Avenue B off 14th Street) for John Morrison’s Motel Luca

7:00 pm ($5): Jenny Dunne and Rick Andrews improvise a single moment in two characters’ lives again and again, exploring three parallel realities, and the difference that a look or tone can make; and duo improv by friends who, by a wild coincidence, have the same name, in the double-bill The Cascade and We’re Matt Weir

[TOP PICK] [FREE] 11:00 pm: Unusually, the lineup hasn’t been announced (for an update, please click here); but this is typically one of the very finest stand-up shows in the country…and is free:Whiplash

[FREE] 11:00 pm: If you’re an audience member who loves stand-up, Monday at 11 should beWhiplash! night (see listing above). If you’re a comic who couldn’t get booked on UCBT’s all-star show, though, you can opt to instead practice your skills on this stand-up open-mic hosted by Michelle Wolf and Erin Lennox: Fresh

This entry was posted on Monday, January 31st, 2011 at 8:43 am and is filed under Best New York Live Comedy Shows. You can follow any responses to this entry through the RSS 2.0 feed. You can leave a response, or trackback from your own site.