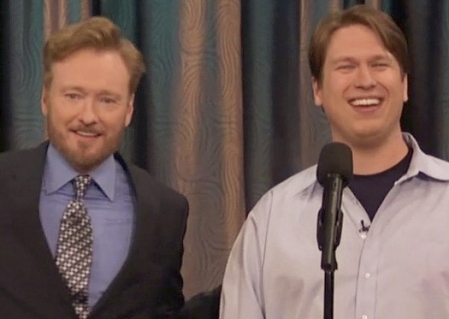 ...and Pete Holmes continues his week-long visit to NYC from LA tonight at "Righteous Kill" and "Sweet"

7:00 pm ($5): Two tough guys from the 1930s will explain the ins and outs of Hollywood at sketch show Listen Kid! ; and duo improv by Dustin Drury and Andrew Yurman-Glaser in Upstate New York

[FREE] 7:00 pm: Open mic for comedy of all types (with sign-up starting at 6:00) at Queens LIC’sThe Creek hosted by Robert Dean: The Dean’s List

8:00 pm ($8): The worlds of “magic, mind-reading, and mutilation” are explored by Matthew Holtzclaw and Prakash Puru: Strange Things

8:30 pm ($5): In this double-bill, each of two of The Magnet’s singing improv troupes will make up a musical on the spot based on an audience suggestion: Tambourine & BEEES!

9:30 pm ($5): A one-woman show from Julie Ann Dulude about being raised by strict Catholic parents: Bless This Mess

[FREE] 10:15 pm: In this free show, audience members can join in with veteran musical improv talents to make up stories in song on the spot: Musical Magnet Mixer

This entry was posted on Tuesday, June 28th, 2011 at 7:03 am and is filed under Best New York Live Comedy Shows. You can follow any responses to this entry through the RSS 2.0 feed. You can leave a response, or trackback from your own site.