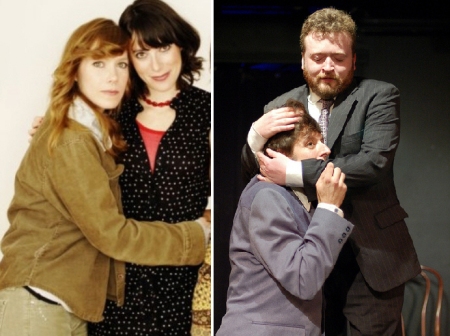 Andrea Rosen does stand-up—if she's not busy giving birth—tonight at "Marking Out;" improv geniuses Anthony Atamanuik and Neil Casey craft a film on the spot as "The Two-Man Movie"... 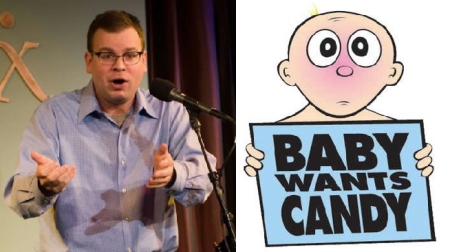 7:00 pm & 9:00 pm (no cover, 1-item min.): The perfect show for short attention spans—open-mic stand-up with 4 minutes per set and 25 comics crammed into 2 hours—with an early show hosted by Sean Donnelly & Blaine Perry at 7:00 pm, and an entirely different group of stand-ups hosted by Dan Cartwright & Dave Greek at 9:00 pm—at the Luca Lounge (222 Avenue B off 14th Street) for John Morrison’s Motel Luca

[TOP PICK] 8:00 pm ($12): This top musical improv troupe has wowed audiences around the world with its skill at making up an hour-long musical moment by moment. The plot and characters, the musical accompaniment, even the song lyrics and the “choreography” are invented on the spot, with no pre-planned structure. Please note this is among the last chances to enjoy improv genius Tara Copeland on an NYC stage before Tara moves to LA next month. Come see why BWC won aFringeNYC Award for Outstanding Unique Theatrical Event by catching any or all of this four-night run (through Thursday) at the Hudson Guild Theatre (441 West 26th Street): Baby Wants Candy

[TOP PICK] 8:00 pm ($5): Gavin Speiller (Death By Roo Roo, Ben Rodgers (Reuben Williams, Cage Match), and Jonathan Gabrus (The Law Firm, The Nights of Our Lives) make up a single long scene as genius troupe Outlook of the Poet; and in the other half of this double-bill Joanna Bradley performs a one-woman show about how awful people are, directed by the wonderful Becky Drysdale: Everybody’s Dumb and Boring

[TOP PICK] 8:00 pm ($10): My #1 pick for the 2007 FringeNYC Festival, this wonderful group of actresses/improvisors portray characters as if they were in a play, but improvise everything they say and do. The luminous performers include Katharine Heller, Brenna Palughi, Lynne Rosenberg, Lauren Seikaly, and Molly Knefel, each of whom is immensely appealing and quick-witted. Further, they have an intimate, lovely chemistry with each other; and they’ve all committed to baring their personal lives, thinly disguised via their characters (hence the title’s Naked). As a result, this is one of the most honest & nuanced improvised shows you’ll ever see. This show was previously a wonderful theatrical event that cost $18 and up. Don’t miss this five-week Monday evening run, concluding August 15th, at the elegant Cherry Lane Theatre (38 Commerce Street, near the #1 subway’s Christopher Street stop) that allows you to catch the gals for a mere $10: Naked in a Fishbowl

[TOP PICK] 9:30 pm ($5): One of UCBT’s very finest in-house sketch comedy troupes Dweeb(spearheaded by the razor-sharp Amy Heidt and Stephen Soroka), plus in-house troupe Thunder Gulch (which isn’t what it used to be, but features such appealing talents as Leslie Meisel, Ari Scott, and Amber Nelson), trying out new bits at Maude Night

[TOP PICK] [FREE] 9:30 pm: Typically stellar comics in a show “where improv and stand-up bleeds in and out of each other. One comedian starts with stand-up. Soon he or she is joined by a second comedian—and the two improvise scenes inspired by the first comic’s stand-up. Eventually the first comic leaves and the second comedian performs stand-up. When that set is over, her or she’s joined by the first comedian and a third comedian. The three improvise scenes inspired by the second comedian’s set. Then comedians one and two exit, and the third comedian performs his/her set until being joined by comedians one, two and a new fourth comedian…and so on. The process continues till we run out of comedians stashed backstage.” It’s all the brainchild of Nick Vatterott, who hosts this bold & messy new format at The Creek in Queens’ Long Island City upstairs theatre: Klusterphuk

This entry was posted on Monday, August 8th, 2011 at 12:45 am and is filed under Best New York Live Comedy Shows. You can follow any responses to this entry through the RSS 2.0 feed. You can leave a response, or trackback from your own site.