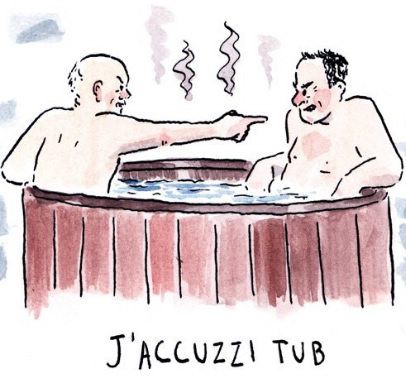 [FREE] 6:30 pm: In this free show, audience members (signing in at 6:00) can join in with veteran improv talents to make up scenes on the spot: Magnet Mixer

[TOP PICK] 7:30 pm ($7): A rotating cast of veteran improvisors make up scenes based on the improvised monologues of the co-owner of the Magnet Theatre: The Armando Diaz Experience

[TOP PICK] 8:00 pm ($5): Mike Still (Death by Roo Roo, Diamond Lion) pulls out all the stops for a dynamic one-man show packed with comedic ideas revolving around a tyrant so evil that he machine-guns the audience (twice!), with direction by fellow Roo Roo star Neil Casey: Dictator For Life;

…and in the other half of this double-bill, a smart troupe consisting of writers for The Onion perform their best sketches: Pangea 3000: 12 Years of Hard Work

[TOP PICK] 8:00 pm ($8): Naomi Grossman tells tales of past lovers via a sideshow format, which is entertaining from story to story (but don’t expect the sum to be greater than the parts, because the material offers no evidence that Naomi learned anything from these experiences…). This one-woman show just played at FringeNYC 2011 for $18; see it tonight for a bargain $8: Carnival Knowledge

9:30 pm ($5): Improvisors (not announced) make up one-act plays on the spot at The PIT’s basement lounger for The Scene

9:30 pm ($5):Sketch comics provide an inside look at what your teachers used to say behind closed doors: The Teacher’s Lounge

[TOP PICK] 11:00 pm ($5): Improv duo The Brothers Hines compete against The Shucks for audience laughs and votes at the raucous Cage Match

This entry was posted on Thursday, September 1st, 2011 at 9:43 am and is filed under Best New York Live Comedy Shows. You can follow any responses to this entry through the RSS 2.0 feed. You can leave a response, or trackback from your own site.