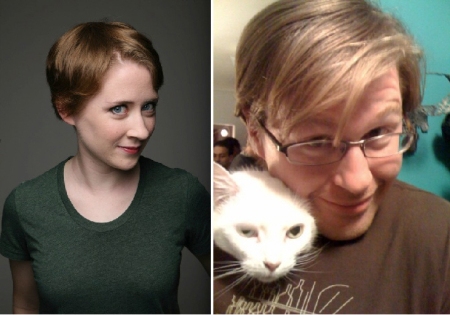 Molly Knefel (above) and her brother tonight host top comics Kurt Braunohler (above), Sean Patton, and Murderfist at the monthly extravaganza "John and Molly Get Along"...

...and Mike Still plays out his desire to rule the world in "Dictator for Life"

[TOP PICK] 7:00 pm ($5): Mike Still (Death by Roo Roo, Diamond Lion) pulls out all the stops atUCB West for a dynamic one-man show packed with comedic ideas revolving around a tyrant so evil that he machine-guns the audience (twice!), with direction by fellow Roo Roo star Neil Casey:Dictator For Life

[$] 7:00 pm ($16.50, plus 2-drink min.): Sharp NYC stand-ups audition to be cast for Comedy Central’s Comics to Watch show at the upcoming New York Comedy Festival by performing their best stuff tonight at the Carolines Comedy Club: Comics to Watch Auditions

[TOP PICK] 7:30 pm ($5): For this double-bill at UCB East, Neil Casey & Anthony Atamanuik, both genius members of Death by Roo Roo, perform the jaw-dropping feat of making up an entire feature film as The Two-Man Movie; and another genius improv troupe consisting of trio Gavin Speiller of Death By Roo Roo, Ben Rodgers of The Curfew, and Jonathan Gabrus of The Law Firm) performs as Outlook of the Poet

[TOP PICK] 8:00 pm ($5): Chicago-based Sean Flannery John Hartman (called “a master storyteller” and “Best Stand-Up 2010” by The Chicago Reader) performs a one-man show at UCB West for one night only “about the last dozen or so times he nearly killed himself by drinking, partying, or flat-out not paying attention:” Never Been to Paris

[TOP PICK] 9:00 pm ($5): For this double-bill at UCB East, brilliant improvisors (and real-life couple) Laura Grey & Jordan Klepper make up a 1970s swingers party coupling and its aftermath at Key Party; and then UCBT Harold Night house troupes Dance Break and Very Good Kiss make up scenes without relying on the usual long-form “Harold” rules at Cheating on Harold

[TOP PICK] 9:30 pm ($5): One of the finest comedic storytelling shows in the country, in which brilliant writer/performers—who tonight are Anthony Atamanuik, John Flynn, Jon Gabrus, Juliet Hope Wayne, and wonderful host David Martin—tell tales that are brutally honest and utterly hilarious at UCB West, with tonight’s highly promising theme Addiction: The Nights of Our Lives

[TOP PICK] [FREE] 11:00 pm: As many as a dozen guests packed into 75 minutes performing stand-up, improv, sketch, and occasionally acts that defy categorization. The level of talent can vary wildly, but for some (like me), that’s part of the laid-back fun; and this is often one of the most amazing comedy shows in town. Tonight Mike Still—who’ll soon be moving to LA—gathers some of the performers he’s most enjoyed while in NYC, including John Gemberling, The Two-Man Movie, Gramp’s, Murderfist, UCB Tourco, Rory and Craig, Jim Santangeli, As the Diamond Burns, Twelve Thousand Dollars, Bangs, Badman, and more. Come support the experimentation, and periodic magical surprises, that this uniquely organic rollercoaster of a weekly show at UCB West makes possible—and don’t forget to toss $1 in the bucket on your way out: School Night

This entry was posted on Wednesday, September 28th, 2011 at 8:31 am and is filed under Best New York Live Comedy Shows. You can follow any responses to this entry through the RSS 2.0 feed. You can leave a response, or trackback from your own site.