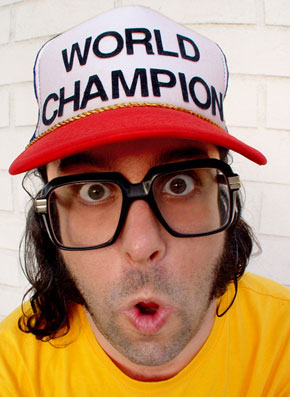 Judah Friedlander helps celebrate a move to Pianos for the super-hosts of Comic Book Club...

...and Jen Kirkman (above), Jessi Klein, and Hannibal Buress perform at Sweet

[FREE] 6:00 pm: Open mic for comedy of all types (with sign-up starting at 6:00) at Queens LIC’s The Creek upstairs theatre hosted by Robert Dean: The Dean’s List

[TOP PICK] [FREE] 7:30 pm: Judah Friedlander (30 Rock, Meet the Parents, Along Came Polly, author of How to Beat Up Anybody) and Joe Kelly joining super-hosts Alex Zalben, Justin Tyler, and Pete LePage in a lively & hilarious discussion about four-color pop culture The debut of this wonderful show about comic books at its brand new location Pianos (158 Ludlow Street), with giveaways of comics and gift certificates: Comic Book Club

8:00 pm ($5): A one-man show by Pat Bellatina “being selected as the keynote speaker at his former high school’s commencement. Will he be brave enough to admit that he knows nothing? This comedic musical memoir explores the illusion of success, the joys of lying, and growing up in the Bronx while pretending you didn’t” at The PIT upstairs theatre following a sold-out run at Ars Nova: No No No Yes

8:30 pm ($5): In this double-bill, each of two of The Magnet’s singing improv troupes will make up a musical on the spot based on an audience suggestion: Mint Condition and Rosencrantz

9:00 pm (no cover, 1-item min.): NYC stand-ups (not yet announced) performing at Luca Lounge(222 Avenue B off 14th Street) hosted by twins Adam & Todd Stone, who for this weekly show leave behind their trademark suits: Jackets Off

[FREE] 10:15 pm: In this free Magnet show, audience members can join in with musical improv troupe Mint Condition to make up stories in song on the spot: Musical Magnet Mixer

This entry was posted on Tuesday, March 27th, 2012 at 9:14 am and is filed under Best New York Live Comedy Shows. You can follow any responses to this entry through the RSS 2.0 feed. You can leave a response, or trackback from your own site.