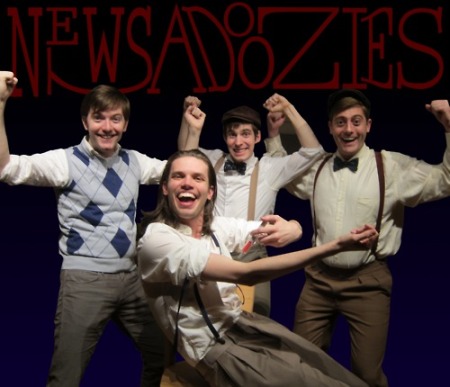 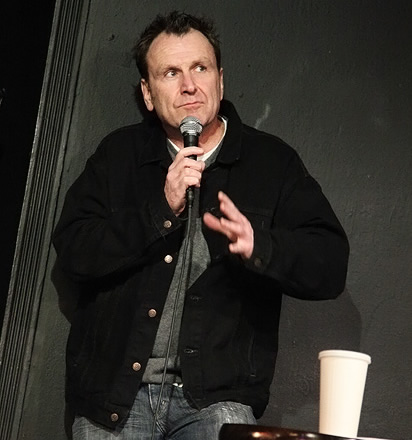 [TOP PICK] 8:00 pm ($5): At UCB Chelsea, a delightful dark musical about the rich consuming the poor—literally. Witty songs from Brian Glidewell, Marcy Jarreau, and Kevin Carter, a uniformly strong cast (Megan Maes, Aaron Jackson, Michael Martin, Katie Schorr, Dan Hodapp, Brian Glidewell, and Stephanie Streisand), and sharp direction from Christopher Gladysz and Lauren Conlin Adams make this 30-minute surreal parody of Newsies a winner as a UCBT comedy, and recommended. That said, right now the story is paper-thin and the characters cardboard. While the latter is turned into an asset (e.g., a leg-injured character is hilariously named “Cripply”), I’m hoping the creators consider making all the elements deeper and more nuanced, and expanding the production to a 90-minute legit theatre length. Meanwhile, enjoy this remarkably compact version that delivers a quick, sharp punch to the gut you’re likely to remember: Newsadoozies: A Man-Eating Musical…

…plus in the other half of this double-bill, a (mostly) one-man show by George Kareman titled Incredibly Extreme and Extremely Incredible

[TOP PICK] 9:00 pm ($5): Neil Casey & Anthony Atamanuik, both genius members of Death by Roo Roo, perform the jaw-dropping feat of making up an entire feature film at UCB East as The Two-Man Movie

[FREE] 9:00 pm: NYC stand-ups do sets “and then have a discussion about what’s going on in the world and the mysteries of life” at The Creek upstairs theatre in Queens’ Long Island City, hosted by Chris Laker: The Show

[TOP PICK] 9:30 pm ($5): Abbi Jacobson & Ilana Glazer created Broad City as a Web series, which was then picked up for development as a TV series for FX…and is also a monthly stage show at UCB Chelsea. Tonight’s theme is Broad City Goes to Camp, with new videos, stand-up, character pieces, and “a delicately crafted hour of fun:” Broad City Live

[TOP PICK] [FREE] 11:00 pm: The wonderful Sasheer Zamata (Doppelganger) hosts as many as a dozen guests packed into 75 minutes performing stand-up, improv, sketch, and occasionally acts that defy categorization. The level of talent can vary wildly, but for some (like me), that’s part of the laid-back fun; and this is often one of the most amazing comedy shows in town. (Tonight’s scheduled performers include Bridey Elliot; for the full lineup, please click here.) Come support the experimentation, and periodic magical surprises, that this uniquely organic rollercoaster of a weekly show at UCB Chelsea makes possible—and don’t forget to toss $1 in the bucket on your way out: School Night

11:00 pm ($8): A sketch show by The Quanrudes about The Dark Knight and other pop culture topics at The PIT downstairs lounge: Got Ham? A Batman Sketch Show