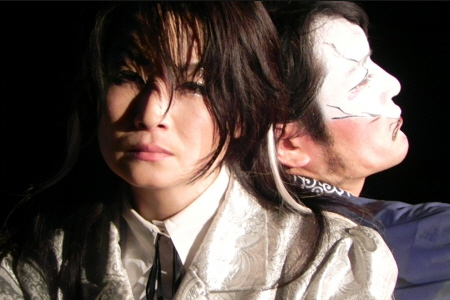 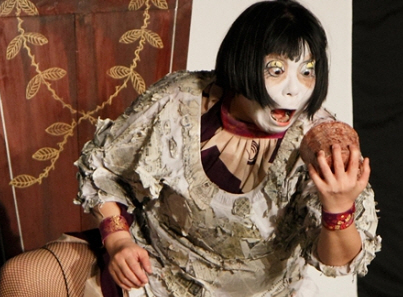 …from an all-Japanese troupe (with English subtitles), running
7:00 pm tonight…

…Saturday at noon, and Sunday at 2:00 at FringeNYC 2012: Hanafuda Denki—A Tale of Playing Cards

[MEGA-TOP PICK] [$] 7:00 pm ($18): A spectacular dark fantasy comedy that’s a bit like anime on stage; colorful, dream-like, overwhelming, and like nothing else you’re likely to see this year. It’s from an all-Japanese troupe (with easy-to-read English subtitles projected on the wall); and kudos to FringeNYC for bringing this amazing show to New York. Don’t miss your three remaining chances to see it tonight at 7:00, tomorrow at noon, and Sunday at 2:00 at the HERE Theatre Mainstage (145 Sixth Avenue; take the C/E subway to Spring Street): Hanafuda Denki: A Tale of Playing Cards—Are You a Winner or a Loser in This Life-and-Death Game?

7:00 pm ($7): Improv at The Magnet that flows from moment to moment, with no sweeps or tag outs—”each exit starts a new scene, while performers use devices ranging from monologues to in-scene questions to break into characters and relationships quicker and deeper:” Scoresby; plus in the second half of this double-bill, improv troupe LD50

[TOP PICK] 7:30 pm ($10): Stone Cold Fox is the only sketch troupe (vs. improv troupe) to ever be honored with an ongoing spot on the prestigious UCB Chelsea weekend schedule. It’s earned this slot because its cast is one of the finest in comedy, with each performer strong enough for potential stardom. As for its writers, they sizzle when at their best; but when I saw this new show about two months ago, it was a work in progress. Regardless of the current state of the script, you’re virtually guaranteed a good time from the all-star cast—Fran Gillespie, John Murray, Brandon Scott Jones, Molly Lloyd, D’Arcy Carden, and Johnathan Fernandez. (The scary faces Molly Lloyd makes are worth the trip all by themselves…) Directed by ace improvisor Ryan Karels: Stone Cold Fox: You Probably Think This Show Is About You

[$] 8:00 pm ($15): Twelve improvisors at The PIT upstairs theatre will improvise for 24 hours straight, from 8:00 pm tonight until 8:00 pm tomorrow night. For $15, you can come and watch for the entire 24 hours or any portion of it. The performers for this event are Darcy Burke, Nick Carrillo, Kevin Cragg, Patrick Cucuta, David Chase Kimball-Stanley, Michael Greene, Toby Knops, Adam Luke, Oscar Montoya, Chris Roberti, Rebecca Vigil, and Marshall York: 24 Hour Improv Challenge

[$] [DISCOUNTED] 9:00 pm & 11:00 pm (FREE TICKETS if you reserve in advance by calling (212) 260-2445 and mention HyReviews.com, but there’s still a 2-drink min. per person): Mike Britt (Comedy Central), Dan Soder (Comedy Central, VH1; for set about being a hypochondriatic drug user, please click here), Aaron Berg, and more performing at the only comedy club in the East Village: Eastville Comedy Club

[$] [DISCOUNTED] 10:00 pm ($15 [vs. $25] online or at the box office using discount code BBOX): Telly Savalas returns to life to entertain you and provide life guidance in this 50-minute show that was a hit at FringeNYC 2011 and is now enjoying an open-ended Friday night run at the Soho Playhouse’s downstairs Huron Club. The script is at times very smart, especially in its choices of hilarious video clips and music tracks from the real Savalas…who, in his more intense moments, apparently rivaled William Shatner at his silliest. But even when Hunter Nelson’s writing isn’t consistent, actor Tom DiMenna—who is a professional comic with great timing and skill at engaging an audience—will keep you entertained: Who Loves You, Baby?

Midnight ($5): A three-person improv competition at UCB East hosted by Brian Glidewell, Josh Patten, and Ben Rameaka: Three for All

[FREE] Midnight: This show might not be much fun for audience members, but it’s an amazing opportunity if you want to perform sketch for free and with almost zero hurdles on the prestigious UCB Chelsea stage. Plus it’s hosted by members of Maude troupe Fambly, typically including such wonderful talents as Nicole Byer and Veronica Osorio: Liquid Courage

This entry was posted on Friday, August 24th, 2012 at 11:27 am and is filed under Best New York Live Comedy Shows. You can follow any responses to this entry through the RSS 2.0 feed. You can leave a response, or trackback from your own site.