My favorite fast food place, Tuck Shop, got hit hard by Sandy. Please check out its amazing Aussie meat & veggie mini-pies; the 68 East 1st Street store is near UCB East and open very late…and is run by a fiery redhead who’s a delight. 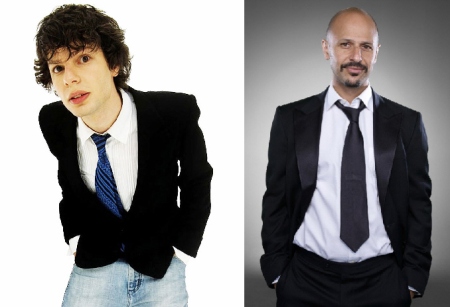 My favorite fast food place, Tuck Shop, lost a lot because of Sandy. Please check out its amazing mini-pies. The 68 East 1st Street store is near UCB East and open very late…and is run by a fiery Aussie redhead who’s a delight.

[TOP PICK] [$] 2:00 pm & 8:00 pm ($65): This isn’t pure comedy, but an enchanting hodgepodge of original tall tales fueled by laughs. The 2-hour play from the wonderful guys of PigPen blends shadow puppetry, songs, inventive staging, and more to create living dreams. For my review of PigPen’s two previous shows at FringeNYC, please click here and here. This newest work is their most ambitious, and that sometimes results in the story feeling too slow or padded; but it also yields a deeper emotional payoff. And even though not all the bits hit the mark, so many of them do that you’re likely to feel satisfied—and missing PigPen’s world after the show is over. The production is at The Gym at Judson (243 Thompson Street) in the West Village: The Old Man and the Moon

[FREE] 6:00 pm: Improv that travels back and forth in time at The Creek upstairs theatre in Queens’ Long Island City: Land Before Timecop

[MEGA-TOP PICK] [$] 8:00 pm ($26 via the box office or $30 online): UK TV star Simon Amstell (BBC’s Do Nothing, Grandma’s House) performs a brilliant one-man show about the anxieties of success and the meaning of life—and yes, he will tell you the meaning of life before the evening ends (worth the price of admission right there…). While the show is tightly scripted, Simon is one of the most lightning-quick wits in comedy, and at the performance I attended reminded me of Daniel Kitson by crafting many of the best moments on the fly from responses to the audience. (For example, when a woman in the first row abruptly got up to leave Simon did several minutes on that; and when she returned from the bathroom and explained she hadn’t missed anything because she’d seen Numb before, Simon replied, “I don’t know whether that makes it better or worse. Does that mean you waited until the part of the show you liked the least?”) Take advantage of this too-brief six-night run in NYC (through November 21st) and nab tickets at the lovely Theatre 80 St. Marks (80 St. Marks Place, between First and Second Avenues) for Simon Amstell: Numb

[TOP PICK] [$] 8:00 pm & 10:30 pm ($38.25 & 2-drink min.) An Iranian-American stand-up (for a sample set, please click here) who’s a founding member of the Axis of Evil Comedy Tour that featured top Middle Eastern-American comics, and an actor who’s performed on ABC’ s Better off Ted and Knights of Prosperity, FOX’ s Life on a Stick, HBO’s Curb Your Enthusiasm, NBC’s The West Wing and ER, and many other shows & feature films, headlining tonight through Sunday at the Carolines Comedy Club: Maz Jobrani

8:00 pm ($10): Two of the most respected PIT improv troupes performing on this weekly double-bill at the upstairs theatre: Big Black Car and The Baldwins

8:00 pm ($5): Improvisors take established characters and make up melodramatic stories about them with song and dance at The PIT upstairs theatre: Clocks: The Musical Soap Opera

9:30 pm ($10): “A cabaret of darkly funny songs and topical sketch comedy about culture and politics,” following sold out shows at Joe’s Pub and now enjoying a long run at The PIT upstairs theatre: Political Subversities

[MEGA-TOP PICK] [$] 10:00 pm ($20): The return of one of the funniest comedies—and finest comedic ensembles—to grace New York, and what ended up as the very best show of this year’s FringeNYC Festival, playing at the Soho Playhouse’s upstairs theatre. Please read my review by clicking here, and then take advantage of this opportunity to see the Chicago-based 5 Lesbians Eating a Quiche

[TOP PICK] 10:00 pm ($5): A small army of comics performing as characters at The PIT downstairs lounge hosted by Rob Stern: Overload the Machine

11:00 pm ($5): A sketch/variety show at The PIT upstairs theatre operating from a fun dark premise: “When Vincent Welles died and went to Hell, he soon found out his punishment was to host a variety talk show for all eternity in the fiery underworld. Join Vincent as he, along with his demonic producers and werewolf sidekick Warren Talbot, host special guests and surprises:” Welcome to Hell with Vincent Welles

[TOP PICK] Midnight ($5): Improv is dominated by guys…and for no good reason. A way to help remedy this situation are shows like this one at UCB Chelsea, which is a monthly open improv jam for any female wanting to participate, at any experience level—and which has a very special and communal “gal energy” you’re unlikely to find anywhere else. The show’s creator, the wonderful Shannon O’Neill, is out of town this weekend, but it’s still likely to be good thanks to the participation of other top UCBT gal improv stars: The Lady Jam

Midnight ($5—or free if you show up in a costume): “A scandalous night of down-right-sexy improv at The PIT downstairs lounge. Incorrigible performers team up to turn down the lights, slip into something a little more comfortable, and spend the good part of an hour tickling your funny boners. Beware of partial nudity, strong sexual themes, and the possibility to be dragged on stage for a not-so-wholesome game of Truth or Dare:” Yes, Yes, Yes…And

This entry was posted on Saturday, November 17th, 2012 at 1:08 am and is filed under Best New York Live Comedy Shows. You can follow any responses to this entry through the RSS 2.0 feed. You can leave a response, or trackback from your own site.