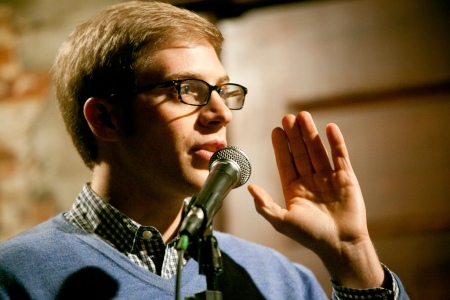 [TOP PICK] [$] [DISCOUNTED] 7:30 pm ($7.37 if you use code BREAKOUT online or by phone, plus 2-drink min.) One time I saw Joe Pera sing beautifully and then smash three dozen plates to pieces. Another time he ended his set by slicing milk. For deadpan Joe’s latest Kaufman awards submissions, please click here and here. For a mere $7 cover, come join me to see this unique NYC treasure headline for one night only at the Carolines Comedy Club: Joe Pera

7:30 pm-9:15 pm ($5): Long form improv known as The Harold from UCB Chelsea house troupes Sherlock & Cookies, Graceland, and Bucky at this first half of Harold Night

9:15 pm-Midnight ($5): Long form improv known as The Harold from UCB Chelsea house troupes Namaste, The Regulars, and Grammer—plus advanced improv students perform The Way of the Samurai—at this second half (continued from 7:30 pm) of Harold Night

[TOP PICK] 9:30 pm ($5): Brilliantly innovative comic Anthony Atamanuik (Death by Roo Roo, 30 Rock, Conan O’Brien, The Nights of Our Lives) plays oddball characters in a mix of sketch and improv. What’s happening tonight isn’t yet posted, but it’ll happen at the UCB East theatre and will likely be great: The Tony Show

9:30 pm ($8): A one-man multimedia show by Neil Goldberg about “the inherent strangeness of our need to kill and consume other living organisms in order to survive” at The PIT upstairs theatre: One Version of Events