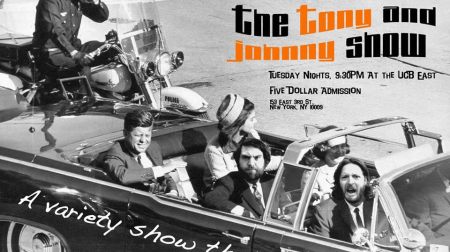 [TOP PICK] 7:00 pm ($5): In this one-woman show, “Lyssa Mandel wrote a lot of stuff when she was 14: the purplest prose, the greatest expectations, the highest stakes, the desire to run screaming from suburbia. Sixteen years older, possibly wiser, certainly more shameless, she shares the genuine article. And nothing’s as genuine as adolescent desires. She guarantees you’ll recognize the sentiment…and nearly die laughing” at The PIT downstairs lounge: A View From the Bitch Seat

7:30 pm-9:15 pm ($5): Long form improv known as The Harold from UCB Chelsea house groups Graceland, Sherlock & Cookies, and The Regulars at this first half of Harold Night

9:15 pm-Midnight ($5): Long form improv known as The Harold from UCB Chelsea house groups Namaste, Grammer, and Bucky at this second half (continued from 7:30 pm) of Harold Night

[TOP PICK] 9:30 pm ($5): Brilliantly innovative comic Anthony Atamanuik (Death by Roo Roo, 30 Rock, Conan O’Brien, The Nights of Our Lives) plays oddball characters in a mix of sketch and improv. Tonight “Tony explores the mysteries surrounding the JFK assassination of 50 years ago. Was the umbrella man simply concerned about rain? Did Jackie want to marry LBJ so she could continue to be First Lady? Plus the truth about the Second Gunman;” as well as stand-up from guests (not announced), all at the UCB East theatre with Andy Rocco: The Tony Show

[TOP PICK] [FREE] 10:15: Sign up at 9:30 pm for the opportunity to make up a musical on the spot with The Magnet improv group Mint Condition: Magnet Musical Improv Mixer