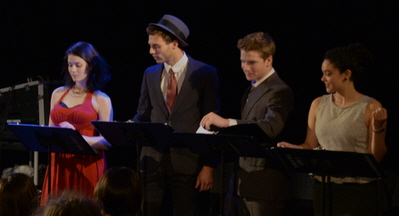 At FringeNYC at 5:00 pm, radio and “Choose Your Own Adventure” collide in the fast-paced Your Radio Adventure!

7:30 pm ($10): The Cosby Show presented “in ways you never imagined” at The PIT downstairs lounge: We Love TV

[TOP PICK] 8:00 pm-10:00 pm ($10 for the entire evening): The Magnet house improv groups The Boss and Junior Varsity performing improv for an hour, followed at 9:00 pm by Your Job: The Musical (improvisors interview an audience member about his or her job and then use that information to create a musical on the spot), at 10:00 pm by veteran improvisors making up scenes based on improvised monologues from Steve Whyte at The Armando Diaz Experience, and finally at 11:00 by improv competition Inspirado (like UCBT’s Cage Match, but with a game-like challenge component): The Magnet’s Night Out

[FREE] 8:00 pm: A monthly showcase of both stand-ups and improvisors at The Creek upstairs theatre in Queens’ Long Island City, hosted by stand-up Zach Broussard and improv troupe Priest & the Beekeeper: Pig Pile

9:00 pm ($10): Improvisors make up a Quentin Tarantino movie at The PIT downstairs lounge—”If you like Grindhouse, Kung Fu, Spaghetti Western, Noir, and the entire 1970s, you’ll want to check out:” The Tarantino

…and in the second half of this double-bill, “Six months ago, Karin and Glenn started emailing each other every time they cried. Then they wrote a comedy show about feelings. To test the theory of ‘Tragedy Plus Time Equals Comedy,’ Karin and Glenn will perform some sketches, dance a little bit, and then tell you some very personal stories that they shouldn’t be talking about in front of this many people,” directed by Stone Cold Fox’s Leslie Meisel & Brandon Gulya: This Is Going to Hurt

[TOP PICK] 10:00 pm ($10): Improvisors who include powerhouse musical improvisor Rebecca Vigil) take an audience suggestion of a band and then make up an episode of VH1’s Behind the Music on the spot at The PIT downstairs lounge: PIT Behind the Music

[TOP PICK] 11:00 pm ($5): The winner of last week’s improv battle goes up against UCB East weekend improv group Bucky, competing for your laughs and votes at UCB Chelsea in the raucous Cage Match

[$] 11:00 pm ($12): A comedy group that’s bad for your breath but good for your laughs performs sketch at The PIT upstairs theatre: Garlic Jackson