TV Alert: Ron Funches and Aubrey Plaza are on Conan O’Brien;
Aasif Mandvi is on David Letterman;
Rob Huebel is on Seth Meyers 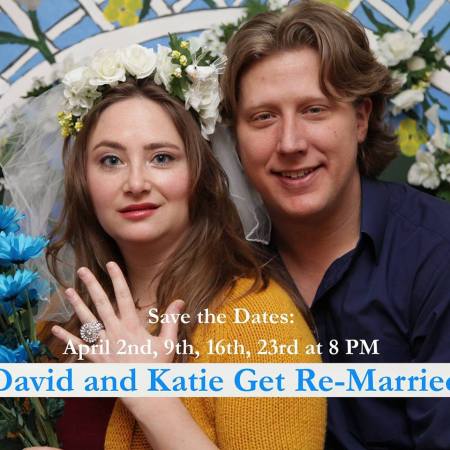 Phenom character comics Katie Hartman and David Carl will probably destroy The PIT stage with epic fights in the debut of their sketch-based play filled with loud, unsettling songs: David and Katie Get Re-Married…

…and right before David’s & Katie’s show, let Tallie Medel, Eleanore Pienta, and Sunita Mani redefine your notions of movement when they perform at The PIT as Cocoon Central Dance Team

[MEGA-TOP PICK] 7:00 pm ($10): Redefining our concept of dance are a three-gal troupe consisting of Eleanore Pienta (breathtaking rising star actress who delivered one of last year’s very best performances as star of indie feature film See You Next Tuesday), Tallie Medel (star of indie feature film The Unspeakable Act), and Sunita Mani (sketch/improv group Chester). For video samples, please click here; and if you like what you see, come experience them in April and May—starting tonight—at The PIT upstairs theatre: Cocoon Central Dance Team

[FREE] 7:00 pm: A stand-up tries out material tonight and Friday at The Creek upstairs theatre in Queens’ Long Island City: Week at the Creek: Simeon Goodson

[$] 7:30 pm ($31.25 & 2-drink min.): A stand-up who’s a cast member on NBC’s Undateable, and has also performed on Chelsea Lately, Brooklyn 99, and Conan O’Brien (for a clip of the latter, please click here), headlining tonight through Saturday at the Carolines Comedy Club: Brent Morin

[TOP PICK] 8:00 pm ($5): At UCB Chelsea, the talented Natasha Vaynblat (improv group What I Did For Love, sketch group Absolutely) performs a smart, funny one-woman show mixing sketches about the types of teachers she’s encountered with video tales of her own experiences during four years as an NYC public school teacher, directed by the wonderful Leslie Meisel: United Federation of Teachers…

…and in the other half of this double-bill, “a sketch comedy about nonsense, lies, and exaggerations” from other a dozen comics: That’s Bullshit!

[TOP PICK] 8:00 pm-Midnight ($10 for the entire evening): The Magnet house improv groups The Boss and Hello Laser performing improv for an hour, followed at 9:00 pm by The Blackout (long form improv in which “scenes are edited solely by blackouts created by the director in the booth and the stage is set by the improvisers from the previous scene”), at 10:00 pm by veteran improv group The Boss, and finally at 11:00 by improv competitionInspirado (like UCBT’s Cage Match, but with a game-like challenge component): The Magnet’s Night Out

[FREE] 8:00 pm: “A new game show where three contestants get quizzed on random topics; raps, video games, different types of soda. We’ll even have a few comics drop by” at The Creek upstairs theatre in Queens’ Long Island City hosted by Marvin Lattimore: A Night of Thrill-Vila

9:00 pm ($5): Four 10-minute comedic plays written over the past month based around an assigned word or phrase—which this month is Train Wreck—at Brooklyn’s The Annoyance Theatre (367 Bedford Avenue; take J/M/Z to Marcy Avenue or L to Lorimer Street) hosted by Mike Breen & Kevin Bauer: Fourplay

9:30 pm ($10): Veteran sketch comic Paul Valenti performs a one-man show that involves audience participation (if you don’t want him to pick on you, sit near the back rows) at The PIT upstairs theatre: Paul Valenti: mYshow

[FREE] 10:00 pm: “Mike Guild knows everything about movies and films. He will take you through the landscape of the cinema, along with comic guests to discuss everything going on the weird landscape that is Hollywood—plus everyone in the audience will win a unique prize” at The Creek upstairs theatre in Queens’ Long Island City: Movie Night With Mike

[TOP PICK] 11:00 pm ($5): Improv group Rizzo gave no breaks to Affirmative Action last week, winning by 96 votes to 65. Tonight Rizzo faces one of the finest improv groups in NYC, Goat (which performs on UCB’s prime slot of Saturday nights at 9:00), competing for your laughs and votes at UCB Chelsea in the raucous Cage Match

[FREE] 7:00 pm: In this free Magnet show, audience members (signing in at 6:00) can join in with improv groupJunior Varsity Laser to make up scenes on the spot: Magnet Mixer

9:30 pm (free for audience members, $5 or 1 drink min. for stand-ups wanting to perform): Open mic stand-up providing 7 minutes per comic (and a free recording of your set!), with order determined raffle-style. Sign up by emailing info@oldmanhustle.com or calling (212) 253-7747, or just walk in and supply your name, to perform at theOld Man Hustle Bar (39 Essex Street) hosted by Solomon Chehebar: Peep Show Comedy Open Mic