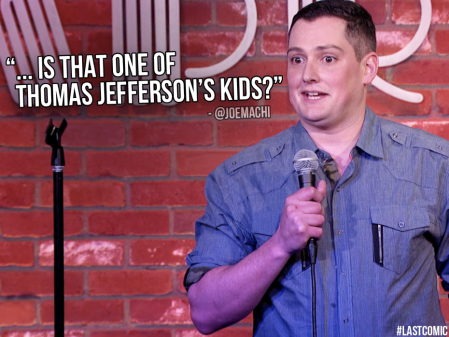 [TOP PICK] 3:00 pm to 12:30 am ($10 per show): The PIT hosts over 18 hours of shows today and 12 hours of shows tomorrow at its upstairs theatre and downstairs lounge for this festival that “gives you a chance to be in a room with your favorite online comedy acts and for the comedians to capitalize on having a live room to heighten their online content. Groups will create new mixed media sketches, host Q&A sessions, record live podcasts, improvise sets based on Instagram comments, and every other intermingling of online and live-on-stage forms they can imagine” today and Sunday for this first annual ClickFest

[FREE] 7:00 pm: A stand-up concludes a week-long run of trying out material at The Creek upstairs theatre in Queens’ Long Island City: Week at the Creek: Paul Hooper

[TOP PICK] [$] 7:30 pm & 10:00 pm ($32.75 plus 2-drink minimum): The hilarious oddball breakout star at the most recent Last Comic Standing (he wasn’t given the win, but he was the far and away the comic who deserved it) headlines tonight and Sunday at the Carolines Comedy Club: Joe Machi

[TOP PICK] 7:30 pm ($10): Improv powerhouses Charlie Todd, Jim Santangeli, Natasha Rothwell, Brandon Gardner, Chelsea Clarke, and more at UCB Chelsea interview an audience member about where he or she grew up and then “turn that town’s tourist attractions, landmarks, hangouts, local celebrities, urban legends, and more into a hilarious show made up on the spot:” The Curfew: Not From Around Here

[TOP PICK] 7:30 pm ($10): “Created in 1995 at the iO Theater in Chicago, The Armando Diaz Experience is the longest running improv show ever. A guest monologist takes a suggestion from the audience and shares true personal tales. These stories are then brought to life by a rotating cast of improv all-stars…and occasionally Armando himself”—with tonight’s guest storyteller Alexis Lambright—at The Magnet theatre: The Armando Diaz Experience

[TOP PICK] [FREE] 8:00 pm: In this acclaimed monthly show, NYC stand-ups “risk getting slapped by Satan himself. Actually, he hosts only bringer shows, but join Matt Wayne and Doug Smith as they step into the Big Man’s shoes and put NYC’s finest through comedy purgatory. Hula-hoops, celebrity impressions, unwanted audience participation, all incorporated into each performance! Will they triumph or will the nether world eat their souls? Come see for yourself in this monthly showcase” at Queens LIC’s The Creek upstairs theatre hosted by Matt Wayne & Doug Smith: See You in Hell

8:00 pm ($8): “When the long-time owner of Ski Mountain dies, everyone expects the mountain to be passed down to his beloved daughter Jocelyn. However, his evil older son Ernest appears at the funeral and takes his lawful control of the mountain. Ernest’s first order of business is to fly in a Swiss mountain and stack it on top of Snow mountain…making a double mountain. While everyone loves the double mountain at first, it becomes clear that Ernest has ulterior motives when he continues flying in Swiss mountains, stacking them higher and higher. With a crisis on their hands, Jocelyn, a reclusive trailer rater named Bearnie, and the employees and residents of Snow Mountain must save the day” at Brooklyn’s The Annoyance Theatre (367 Bedford Avenue; take J/M/Z to Marcy Avenue or L to Lorimer Street): Crisis on Ski Mountain

[FREE] 8:30 pm: This show-and-tell event encourages you to “bring your weird family photos, demonstrate how many flips you can do in a row, reveal the tattoo your uncle gave you at last year’s family retreat—share anything crazy, kooky, strange or insane; the best of the best will win prizes and bragging rights,” plus stand-up from Brandon Scott Wolf (contributor to SNL’s Weekend Update), Gibran Saleem (sharp young stand-up; MTV), Missy Baker, Niles Turner, Blair Socci, and Jason Burke, all performing at Brooklyn’s Over the Eight (594 Union Ave) produced by Lukas Kaiser and hosted by Chris Donahue & Pat Rigby: Show/Tell Show

[TOP PICK] 9:30 pm ($10): This unique weekly show incorporates song and dance into sketch comedy focused on pop culture—and does it surprisingly well, with strong writing and a sharp cast of performers at The PIT upstairs theatre: Pop Roulette

[MEGA-TOP PICK] 10:30 pm ($10): Master improvisor Ed Herbstman (co-owner of The Magnet) teams for one night only with Peter McNerney to make up scenes at The Magnet as comedy duo Trike

[FREE] 4:00 pm: An unusually early weekly open mic stand-up show (“starts late enough to sleep off that hangover but ends just in time to begin a new one”), with sign-up at 3:30 pm, at The Creek upstairs theatre in Queens’ Long Island City hosted by Raj Sivaraman & Sam Evans host: The Amateur Hour