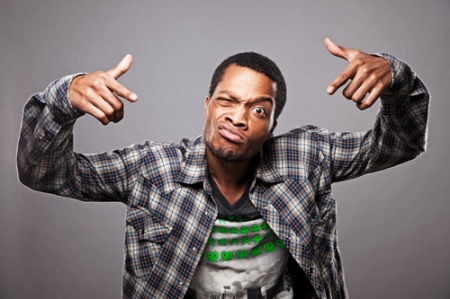 [TOP PICK] [FREE] 7:00 pm: A stand-up who’s performed on MTV, is the sharp co-host of Hot Soup and We’re All Friends Here, and runs the award-winning blog Sandpaper Suit tries out new material one last night at The Creek upstairs theatre in Queens’ LIC (10-93 Jackson Avenue): Week at the Creek: Matt Ruby

[TOP PICK] 8:00 pm ($5): At the UCB Chelsea theatre, “six strangers meet at a mysterious dinner party where they find a surprising connection between them: they’re all idiots:” HINT: A Murder Mystery…

8:00 pm ($5): Indie improv groups Big City, We Know Where You Sleep, and The Improv Group That Takes Off Real Clothes make up scenes at The PIT Loft (154 West 29th Street): Super Indie Takeover

[TOP PICK] 9:30 pm ($5): At the UCB Chelsea theatre, Natasha Vaynblat plays motivational speakers, life coaches, and sad sacks on her road to self-improvement: Self Help Your Self, Help! …

…and in the other half of this double-bill, a mini-play “exploring everything you love about karaoke: mediocre singing, friendship, Tsing-Tao, accidental meet cutes, homicidal Korean women, and of course your favorite 90’s jams!”: Let’s Check Out That Karaoke Spot!

[MEGA-TOP PICK] [FREE] 11:00 pm: Some of the finest comics in the world—who aren’t announced in advance, but it’s usually a great lineup and often an extraordinary one—at UCB Chelsea typically hosted by Aparna Nancherla (one of the best stand-ups in the country; former writer for Seth Meyers; Conan O’Brien, @Midnight, Comedy Central Half Hour, comedy album Just Putting It Out There). Reservations go quickly, but you can probably get in if you arrive early and are okay with standing: Whiplash

This entry was posted on Monday, November 21st, 2016 at 4:17 pm and is filed under Best New York Live Comedy Shows. You can follow any responses to this entry through the RSS 2.0 feed. You can leave a response, or trackback from your own site.